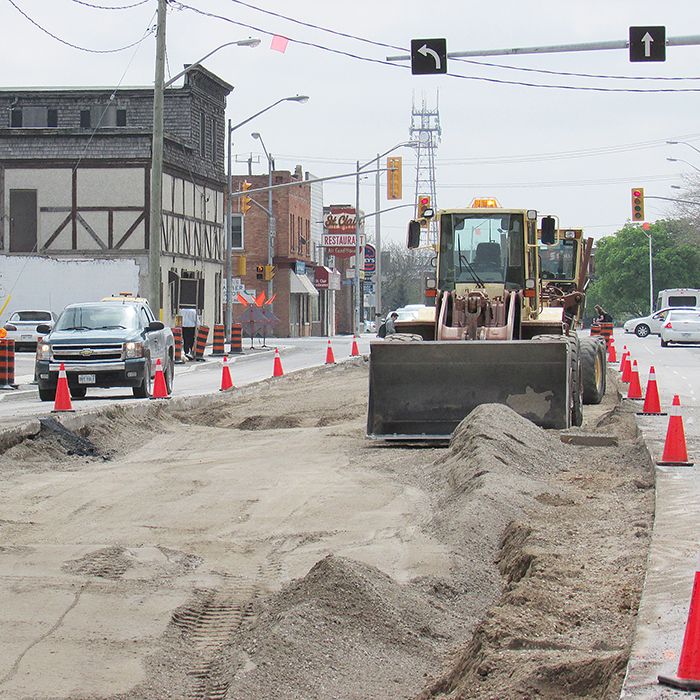 Chatham commuters and St. Clair Street business owners may feel like they are living the movie “Groundhog Day.”

Like Bill Murray’s character, they wake up day after day to the same thing – construction that seemingly never ends on St. Clair between McNaughton and Grand avenues. After going through three months of roadwork last fall and plodding through a long, cold winter, April delivered the road crews once again.

And they will likely be there for another five weeks, according to Nelson Cavacas, municipal manager of infrastructure and development engineering.

While it may seem never-ending to some, he said there is a light at the end of the tunnel.

“We’ve been progressing reasonably well. But we have had weather that’s kind of pushed them back a bit,” Cavacas said. “We are still on target for completion for no later than the end of June. In the next month, we’ll see a huge transformation.”

The plan for St. Clair was for deep remediation of the road base. That means digging down to put in a consistent fill.

“Generally it’s about three feet we’ve dug down. In a few areas, we’ve gone a little deeper to make sure there’s a decent structure for the road,” Cavacas said.

Down that deep, crews have found a variety of materials, including bits of old railway ties from the rail line that once went right down the middle of St. Clair Street.

Much of the subsurface is crumbling concrete, Cavacas said. That has to be removed.

“A good part of it has a concrete base. A small section had brick instead near Amelia (Street), he said. “In that area, we found a few remnants of the old railway ties, but no actual steel rails.”

Cavacas said the mixed material is being replaced with a consistent granular fill. It makes for a smoother road surface on top.

“A concrete base can become a problem. The (concrete) panels can start to rock on you and can create cracking that can continue up to the surface,” he said.

When the granular material is compacted, Cavacas said it doesn’t even let water soak in, which means it will provide a good, solid base. But given the wet spring, it’s creating another problem.

“When this material gets compacted, the water will often just sit on there,” Cavacas said. “We don’t want to be paving with standing water. We have to have a sweeper moving the water off the surface.”

Despite the frustration shown by some commuters, and business owners – one has a sign, “This construction sucks!” outside his business – Cavacas said people generally understand it’s a long process.

“Everybody has been pretty appreciative and as a whole realize we have to get this done,” he said. “We want to make sure the final product is the best it can be.”