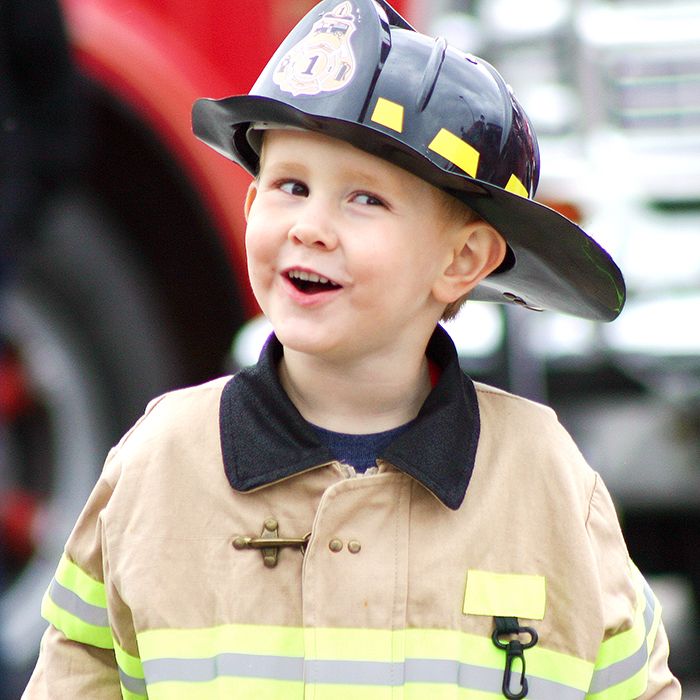 Ethan Cook, 4, from Chatham, checks out the fire trucks at the second annual FireFest in downtown Chatham.

Although Christmas or Halloween might trump it, FireFest has turned into Ethan Cook’s favourite event of the year.

The four-year-old Chatham resident had such fond memories of last year’s inaugural event, he insisted on wearing his firefighter costume to the festivities this time around.

“Having a little firefighter in our house, we knew we had to make it here this year,” said Jen Cook, Ethan’s mom. “The guys at the fire station are always so awesome. They slide down the pole for him, gave him a little tour and everything. It’s our favourite event of the year now.”

“There is one we got ring the bell, another had the old sirens on it,” she said. “(My son) likes being right in there and pretending he is rescuing people. They were doing some rescues down in front of the sire station.”

Chief Richard Picciotto, a New York Fire Department firefighter who survived the 9/11 attack on the World Trade Centre, kick-started the festivities with a presentation to more 1,000 at the St. Clair College Capitol Theatre Friday night.

Rick Arnell, assistant fire chief, said he was honoured to walk through FireFest with Picciotto on Saturday.

“He was taking pictures of our trucks… and with people at the event,” Arnell said. “He’s a very personable guy.”

“The weather held out for us, we had a little bit of rain, but it held out for the most part,” he said. “The crowds got bigger as the day went on. It has been a great day; everyone is smiling, kids have fire hats on. Kudos to Brent Denure and his team for what they did because they are the ones that set this up. They did a wonderful job and deserve all the credit.”

Arnell said the Chatham-Kent Fire Department was hoping to further educate the public about fire safety at the event.

“At the end of the day, if there is never another fire, that is a wonderful thing,” he said. “We have all these trucks, but we don’t want to go, we don’t want to put out fires. We’d rather educate people and that is what this is all about. The more education we get out there, the safer a community we have.”

About 50 new and antique fire trucks were set up at the event.