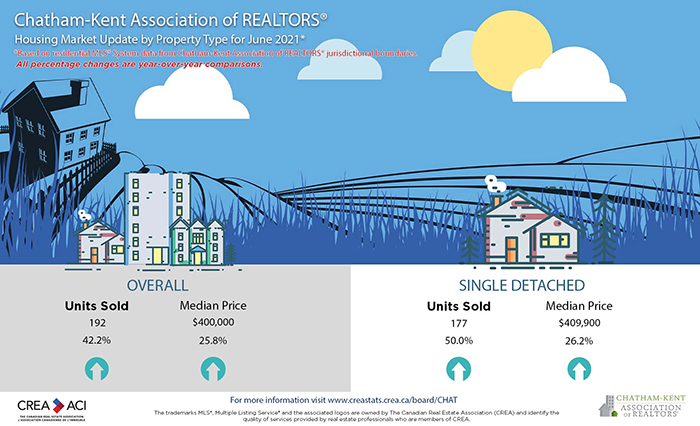 Another month and another set of records for home sales in Chatham-Kent.

In June, 192 homes changed hands, marking a hike of more than 42 per cent from June of last year, and also coming in as the hottest sales month ever in Chatham-Kent.

According to Chatham-Kent Association of Realtors (CKAR) information, home sales in June topped the five-year average by 31 per cent, and the 10-year average by more than 43 per cent.

On a year-to-date basis, home sales totaled a record 922 units over the first six months of the year. This was up sharply by close to 61 per cent from the same period in 2020.

“While many other markets in Ontario are experiencing a cool down from the breakneck pace of activity earlier this year, sales activity in the Chatham-Kent region shows no signs of slowing down,” said Laura Tourangeau, president of CKAR, in a news release.

The dollar value of all home sales in June 2021 was $79.5 million, a substantial gain of 79.7% from the same month in 2020. This was a new record for the month of June and was also the largest dollar value of homes sold for any month in history.

“New listings have surged back onto the market in a big way. However, the pace of demand is so hot right now that this much needed influx of new supply has only barely managed to keep overall inventories from falling any further,” Tourangeau said. “Market conditions remain historically tight and the number of listings available for sale is still trending at record lows, which is going to keep upward pressure on prices until we see any meaningful reversal of these trends.”

Active residential listings numbered 159 units on the market at the end of the month, down more than 19 per cent from the end of June 2020. Active listings haven’t been this low in the month of June in more than three decades. 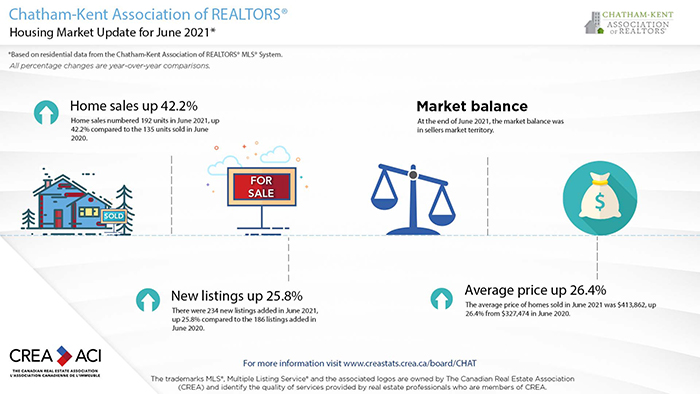