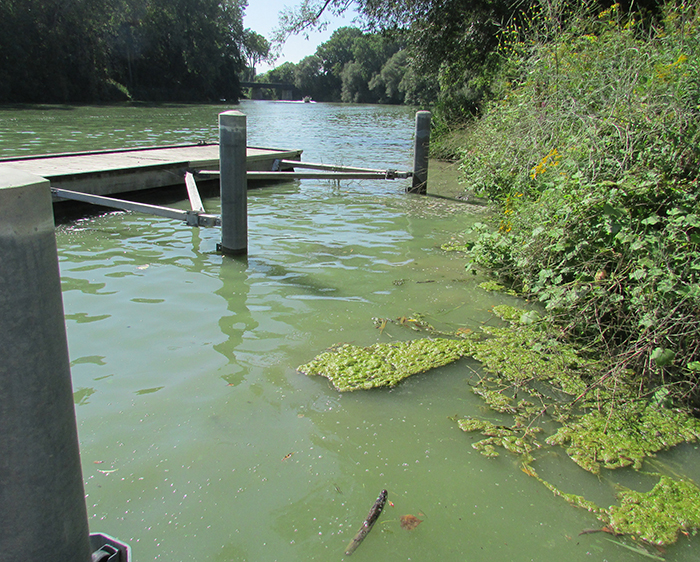 An algae bloom on the Thames River in the summer of 2017.

Efforts to work to reduce the runoff of phosphorous into the Thames River from local agricultural sources remain underway.

The purpose of the project is to improve soil health and reduce the amount of agriculturally sourced phosphorus entering the Thames River, Lake St. Clair and ultimately the Western Basin of Lake Erie, according to LTVCA officials.

Colin Little, agricultural program co-ordinator for the LTVCA, said federal data on phosphorous reduction won’t be known until March of 2022.

“At that time, we’ll have a better idea on if we’ve observed a reduction in phosphorous over the past five years,” he said. “We’re still kind of waiting at this point.”

While LTVCA officials are waiting on federal figures, the work continues on funding reduction initiatives and ideas.

“What we are seeing in terms of participation has been very encouraging. The number of farmers already doing things, and others who are reaching out to take part, has been great,” Little said. “We generally have more demand (for funding) than we can service every year. A lot of farmers are taking action to address this issue.”

Financial contributions will be available to all eligible farmers in the McGregor and Jeannettes creek sub-watershed catchment areas to implement agricultural best management practices (BMPs) this year.

Little said the BMPs are not one-size fits all, and can involve the use of cover crops, nutrient management plans, alternative phosphorous application practices, erosion control efforts, and land restoration practices.

“There is not one silver-bullet solution when it comes to developing a BMP for this particular issue. Every field has different characteristics,” he said. “There are different soil structures and different crop rotations. It can all lead to different BMPs for your operation.”

The use of cover crops can tick several boxes, however. Little said putting such a crop on a field for the non-growing season is useful in weed suppression, soil erosion control, the capturing of nitrogen for the soil, and more.

“The cover crop gets something on the soil to protect the soil on a non-growing period. It protects the soil from wind or water erosion and can really make a difference when we get big runoff events. That helps keeps the nutrients on the field where they belong,” he said.

Little said farmers aren’t in the business of wasting manure, but mistakes happen. However, they are fewer and further between, he said.

“Most farmers understand that manure is an extremely valuable resource. Most don’t want to apply it in a scenario where it could potentially run off. This is definitely something that is improving,” he said.

Along with helping producers with the implementation of BMPs, the LTVCA will monitor water quality, land use, and climate conditions in the sub-watersheds. The information collected will be factored into soil and water assessment models.

The goal is for the Thames River to see a 40-per-cent reduction in phosphorous levels from 2008 figures. It’s part of the Great Lakes Water Quality Agreement overall.

Phosphorous from local agriculture running off into the Great Lakes contributes to algae blooms in Lake St. Clair and in the central basin of Lake Erie.