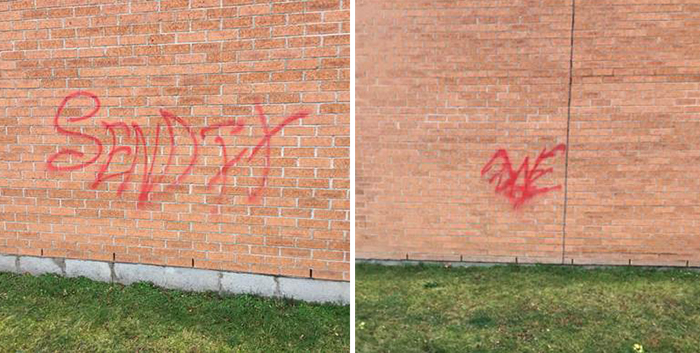 Sometime over the past weekend, someone spray painted the side of the Bank of Montreal on Main Street North in Bothwell.

On Sunday afternoon, police received information that a local man was breaching his house arrest condition over the weekend.

Yesterday afternoon, police located the man and he was arrested.

A 25-year-old Chatham man was charged with failing to comply with his release conditions. He was held pending a bail hearing and remanded into custody until Dec. 3.

Last night, an officer on general patrol observed a man walking on St. George Street in Chatham who was wanted for failing to comply with his release conditions.

The man attempted to evade officers, however he was located on Park Avenue East and taken into custody.

A 43-year-old Chatham man is charged with five counts of failing to comply with his release conditions. He was released pending a future court date.

Last night, police responded to a domestic disturbance at a residence in Raleigh Township.

Through investigation, police learned that the man assaulted his ex-common law along with his father, while damaging a cell phone and kicking open a locked door. The father was transported to hospital for medical attention.

A 42-year-old Blenheim man was arrested and charged with mischief, two counts of assault and failing to comply with his release conditions. He has been held in custody pending a bail hearing.

A 39-year-old Chatham woman was charged with failing to stop for a red light.

Yesterday afternoon, police responded to a two-vehicle collision on Dufferin Avenue near Cenotaph Park in Wallaceburg.

A 34-year-old Wallaceburg woman was charged with following too closely.

A 36-year-old Chatham man was charged with making a turn not in safety.