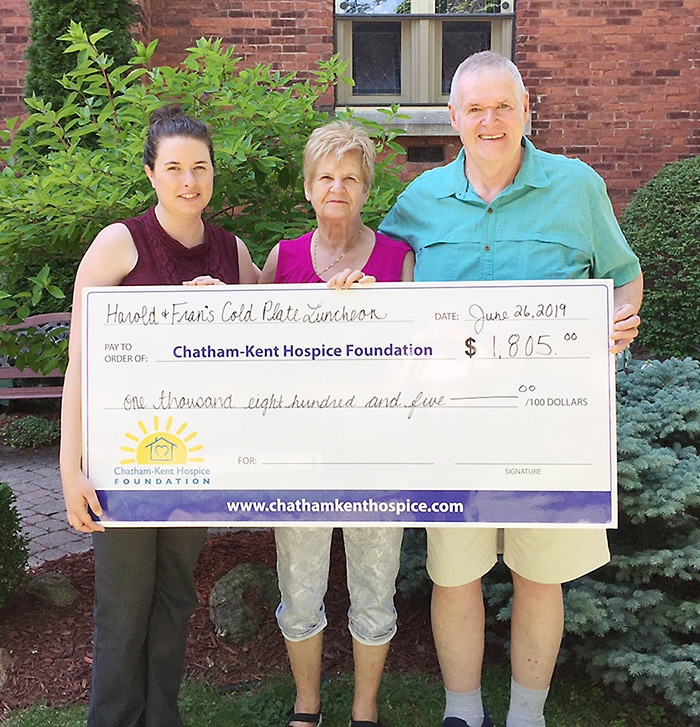 Julia Earlie with the Chatham-Kent Hospice accepts a cheque for $1,805 from Fran and Harold Baughman of Chatham. The couple organized a fundraising dinner on the hospice’s behalf recently.

At The Chatham Voice, we love to celebrate the giving nature of the people of Chatham-Kent.

But it happens with such regularity that we set thresholds on dollar amounts required before photos make it into the paper.

But even then, there are times where photos and stories can get a little dusty in our computer system before they make it into the paper.

And there are many more that just don’t meet the threshold and don’t get into print; we just don’t have the space.

But there are also times where the circumstances of the fundraiser or of the people behind it warrant coverage in our paper, even though the dollar amount raised falls short of our $5,000 threshold.

That’s the case for a recent dinner for the Chatham-Kent Hospice. It raised just over $1,800.

They wanted to help out, and managed to host a dinner, raising $1,805 in the process.

“There is just a real need for it,” Harold said of the hospice. “I had a friend there. The care they give…”

Fran added that to date, more than 600 families have used the hospice to allow a loved one to die with dignity.

“Somebody in everyone’s family will use it,” she said.