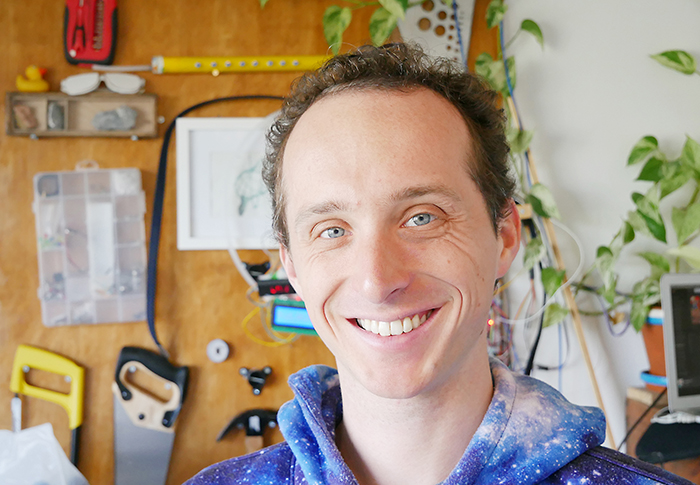 Chatham-Kent native Kurtis Baute is trying to live his dream, one that will help educate others on the marvels of science.

But he’ll need our help to get there.

So far, as informative and interesting as his approaches have been to various subjects, it’s been a tough go.

Baute left his job as a science teacher in Vancouver a year ago to work to produce videos, shared via YouTube, to educate and entertain at the same time.

He’s detailed the history of the universe, through creating, placing and then dropping via chain reaction 13,799 dominoes. Each represented the passage of one million years of nearly 14 billion (13.799) years since the Big Bang created our universe.

As the dominoes fell, he discussed key occurrences in the universe’s progression.

All this was done right here in Chatham-Kent when Baute returned for a visit and made use of his parents’ warehouse near Jeanette’s Creek.

That pretty much started it all for Baute. Since then, he’s produced about a video a month pertaining to various subjects. Those included measuring the size of the Earth, using “just my bicycle and two sticks,” as he termed it.

He’s also run a marathon, with each centimetre of distance representing one year in human history; 42 kilometres represented 42 million years passing. His path? The backcountry roads of Chatham-Kent.

Want to learn about climate change? Spend 14 hours in a large “jar,” an enclosed cube, with 200 plants to hopefully scrub out the carbon dioxide you produce. Baute did.

These are some of his experiments he captured on video over the past year, all interesting and rather unique. And all very educational.

Baute delivers the information in a casual, energetic and informative manner.

He also has the perfect look for a science educator, including his mannerisms, somewhat disheveled hair, and most importantly, unbridled enthusiasm.

But he’s not pop culture. Perhaps if he blew himself up trying to launch himself into space, his video on that calamity would go viral.

What a fickle world we live in today.

Baute’s videos deserve a look, especially by fans of evolution, the environment, and by people from his home community of Chatham-Kent.

View his work at https://www.youtube.com/user/ScopeofScience