Late Sunday afternoon returned our home into a state of feline normalcy for us.

It was downright quiet, in fact.

We had been serving as hosts to Lucky, a cute little kitten owned by Brenna’s boyfriend Matt.

He was back from school for the holidays and Lucky took up temporary residence with us.

Our fur ball feline Finn was initially less than impressed.

Actually, he really didn’t care much at first, as Lucky, a rescue of sorts, was not your typical kitten. At four months of age, you would expect her to be an extremely curious and overly active kitten. But when she first came to visit, she clung to people when picked up, snuggling right into their necks as if to seek the safest place possible, and was more than content to stay in Brenna’s room.

That was our plan: keep the new kitten away from the big cat. The kitten mostly stayed out of sight, spending time in her cat carrier, in a cat scratching post that had two spots for a kitten to crawl into, and in Brenna’s dresser.

One morning Brenna went back into her room to get dressed and check on the cat, except she couldn’t even find Lucky.

But one of her dresser drawers was partially open. She saw two eyes staring out at her from within that drawer.

We figured the kitten had been abused at some point and had obvious trust issues.

She would barely even play with toys when presented with them, or with a person swinging one back and forth right in front of her.

But at night, I could hear her bouncing around and having some nocturnal solo fun. Add people to the mix, and she’d return to her docile form. She never even meowed.

But what took place over the holiday break was a metamorphosis of sorts. Eventually, Brenna would bring the kitten out into the living room to cuddle up on a person (Mary Beth became her favourite sleep spot) and socialize. After a week or so, the kitten would come out of the room on her own.

And that’s when she really got to know Finn.

He would give her a low growl at first, sometimes a hiss, and would turn his back and walk away.

And he’d continue his usual rituals of loud, unique meowing when he wants something (usually food or attention) or just to announce his presence.

But Lucky began to behave like a kitten. She became comfortable with her surroundings, including big Finn, and took to playing, running and jumping.

She’d pester Finn to the point he had no choice but to play with her, chase her and wrestle with her.

They’d run the hallway each evening, crashing into closed doors before tearing off the other way.

But it was like watching a defensive tackle going after an undersized runningback in football.

I spotted Finn on one occasion literally pancaking the kitten. He moved over her and just dropped his weight on her. Or he’d tackle her on the way past and she’d go rolling down the hallway.

Each time, she’d come back for more.

I think Lucky won Finn over by her persistence. She’d go up to him, swat at him a couple of times and roll over on her back. She even did this on a chair once while he was on the floor. She was cute, even when she fell off the chair, leaning too much of her body over the edge.

The Christmas tree, which Finn had wonderfully ignored (he actually took to sleeping under it when the lights were on), came under fire by the two of them. Suddenly both cats wanted to climb it.

Down came the tree before they brought it down.

All too quickly, Lucky had to head back to college. OK, Matt did, taking his cat with him.

Finn spent that afternoon sleeping in a chair in the living room, his back to us.

I’m honestly not sure if he was ticked off for losing the energetic kitten, or happy to have his old routine back.

But Lucky came to us a scared little kitty and went home an energetic typical kitten. 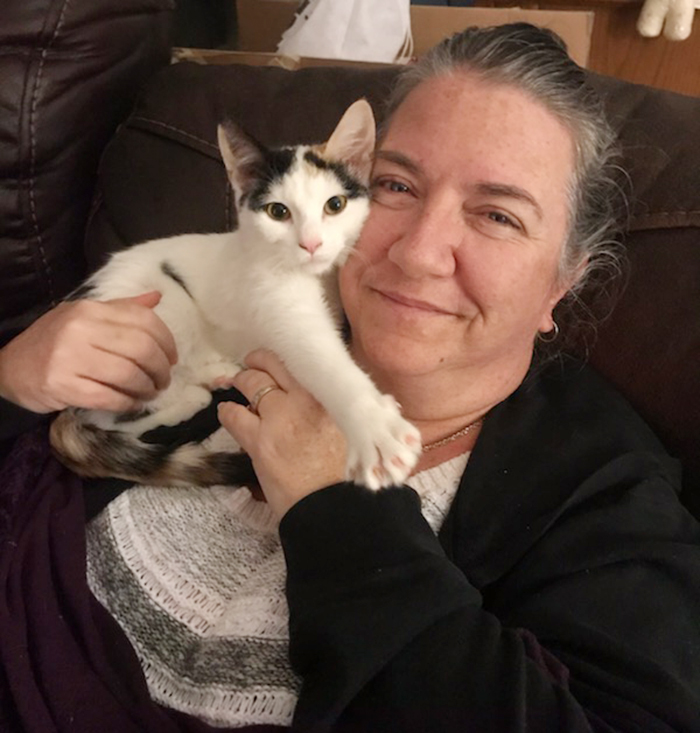 What’s behind (and under) the stove

We are blessed with two stoves in our house, one in the kitchen (duh) and one in the basement for when holding big family events.

We are also cursed for having two stoves. The oven elements weren’t heating properly on our kitchen stove and I put off getting it checked out for months, as we still had the basement stove with a functioning oven.

But the energy of a friend is changing all that. Pete, an industrial electrician by trade, and the guy who moved here recently from the City of Kawartha Lakes with his wife Arlene, popped by on Sunday to check out what caused our oven to conk out.

We pulled the stove out to access the back panel. And that’s when we found three knives, fridge magnets, dust bunnies and crumb critters! Eww.

But they cleaned up easily enough.

And Pete quickly figured out the problem. It turns out the switch that turns on the bake element or the broil element is fried. He even thinks it was a big contributor to us blowing out the element a few years back.

I have to order a replacement switch this week, but we should be good to bake in the kitchen again after that.