Property owners with contaminated wells “utterly reject” the recent findings of the provincial environment ministry that construction of turbines in the North Kent Wind 1 project area is not responsible for wells becoming turbid during pile driving, and the cause is “unknown.”

At a press conference Monday at the home of Paul and Jessica Brooks, an emotional group of well owners and neighbours were at a loss for how they were to continue with no clean water. Now that the province has ruled the wind farm construction is not responsible for turbid well conditions, the water tanks provided to 12 families will be removed by NKW1.

“We bought this property five and a half years ago with good water, and if we had to do it over, we wouldn’t have moved here. This is a nightmare,” Jessica said. “I don’t know if there is anything we could have done differently. We can’t afford $100,000 to hook up to the municipal water trunk line. We can’t afford to pay for water and we can’t dig a cistern until the spring.”

Water Wells First spokesperson Kevin Jakubec said his group has been trying to raise the issue of the “alarming” contamination of wells across north Chatham-Kent.

He said at least 14 wells that “provided high quality drinking water for decades” became seriously polluted right after pile driving began for construction of the NKW1 turbines back in August of last year.

“The Ministry of the Environment seems incapable of saying they made a mistake and are unwilling to correct that mistake. Who does the ministry of the environment work for?” Jakubec said. “The ministry’s action in releasing its findings for farms who had wells contaminated during pile driving construction sets a very dangerous precedent for the protection of our source water, and equally sets a dangerous precedent for public health.”

“People in our region are seeing black well water,” said McGrail. “It’s heartbreaking to hear about families currently using a temporary water source – large holding tanks outside their homes – that can freeze during cold snaps, leaving them with no water at all. Ontarians should be able to count on the fact that they have safe, accessible drinking water – it’s a basic that is not being met right now.”

The community group Wallaceburg Area Wind Concerns (WAWC), which is concerned with the Otter Creek wind farm project, also agrees with WWF and supports the call for an investigation into the safety of the well water.

“The ministry response to the damaged wells in North Kent is not good enough,” said Violet Towell, spokesperson for WAWC. “The deterioration of water quality in these wells didn’t just happen. As Mr. Justice O’Connor confirmed in his 2002 report on the Walkerton water tragedy, the MOECC has responsibility for ensuring a safe water supply in Ontario – they should not stop investigating until they find out what is going on here.”

In an e-mail to the Brooks with the MOECC assessment, district manager Mike Moroney said based on the data provided by the turbine company, they conclude vibration from pile driving “would not have caused the water quality issues you are experiencing.”

He also said in the e-mail the concerns for “potential risks to human health” are unfounded.

“Turbid water is certainly unappealing, but according to the Chatham-Kent Medical Officer of Health, in the absence of bacterial contamination there is no health hazard from undissolved particles in water,” Moroney said.

Matt Dallas, spokesperson for North Kent Wind 1, said that the company acknowledges that

“The North Kent Wind team understands water well issues can be unsettling and we have taken such concerns very seriously,” he said in an e-mail. “The extensive investigations determined the conditions associated with the complaints were not related to construction of the North Kent Wind turbine foundations. The MOECC has completed their review of nine of the 16 complaints from last year and has agreed with these findings, noting that the well locations were beyond a distance that could be affected.”

He added North Kent Wind has been consistently responsive to the concerns of water well owners in the project area during construction. Of the hundreds of wells in the area, 16 complaints were received in 2017. 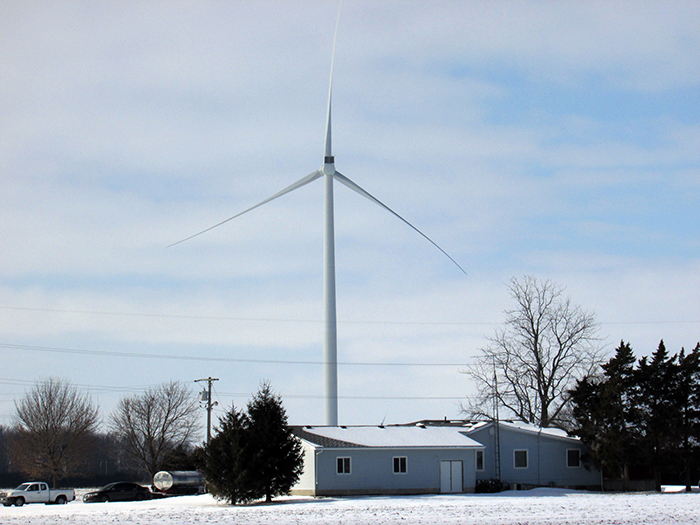 Even though baseline testing for the Brooks family home showed the water to be of good quality, the wind farm company and MOECC said in the assessment that “water quality or quantity concerns appeared related to well construction, the condition of existing well pumping and treatment equipment, ongoing maintenance, or lack of maintenance, in combination with the natural conditions in the region. In the majority of investigations, filtration systems installed between the time of baseline sampling and the complaint were found to be improperly connected between the pump and pressure tanks, resulting in added stress on the pumping systems. When these filtration systems were bypassed, the water flow rates were normal.”

The blame by NKW1 on well construction or maintenance angered a lot of the people with contaminated wells, including another family on Brook Line whose well had been producing clean, clear water since 1912. Dave Lusk, a Chatham township resident, said his well water was clear for four generations on his family farm before pile driving began.

The next steps for families who will be without clean water may include legal action in the form of a judicial review of the MOECC assessment and an injunction asking water tanks not to be removed until the review is completed. He also didn’t rule out civil disobedience to bring more awareness to the issue. 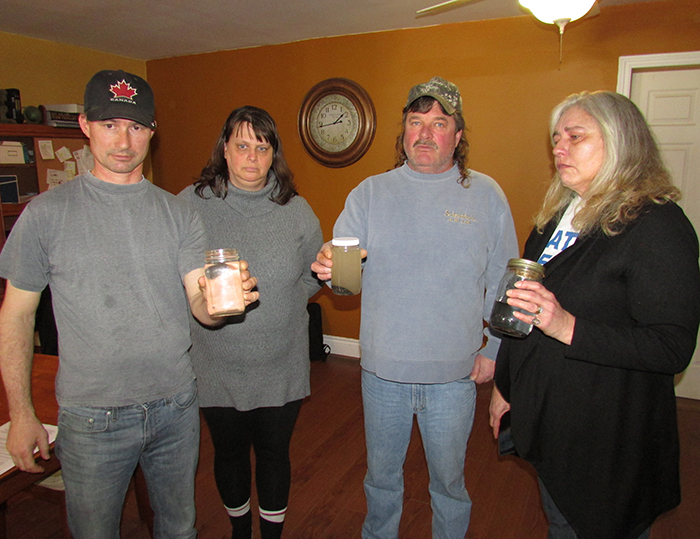