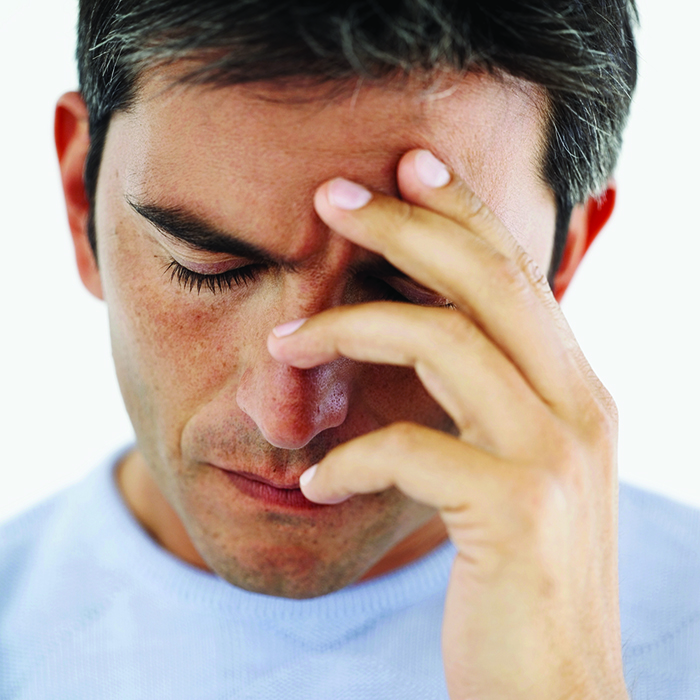 I have never suffered from migraine headaches, and can only sympathize with people who do.

My wife periodically gets them; so do a couple of other folks in our office.

Those nasty headaches are so evil that they can cause nausea, vomiting, and increased sensitivity to light and sound… as well as intense pain.

I’m bad enough when I have a nasty headache, something that decided to invade on the weekend.

I hate headaches where you take over-the-counter painkillers and you simply put it off for a few hours, or drop it back to a manageable dull ache. That was me on the weekend.

After a very fun afternoon in the backyard of friends Chad and Charlene on Sunday, my melon started banging again. By the time we got across town and home, I just went searching through the medicine cabinet, as I’d remembered recently getting a severe headache formula pill bottle that dished up acetaminophen and caffeine.

I popped one of those, kicked back in the recliner, put the fan on and played with the cat half-heartedly with one hand.

Finally, the pain subsided and Monday seemed like everything was back to normal, well as normal for me as you get anyway.

Despite having a nasty headache on and off, it was a fun weekend. I can only think of how a migraine could fully torpedo a weekend, as I’ve seen people in such discomfort firsthand.

It is said people who have migraines should try to find the triggers and avoid them. It could be a type of food, lack of sleep, exposure to a certain chemical, you name it.

I must thank reader Louise Marshall for advice on dealing with our wily kitten. She said a cat that she took in didn’t know what a litter box was, as it was an outdoor cat and just used the dirt outside.

Ours seems to be using the litter box exclusively now, and has been for a couple of weeks (knock on wood), but the advice could be of benefit to countless others.

Louise also said the cat took an interest in her potted plants in the early stages. She put foil around them until it got used to the litter box and it now has no interest in the plants.

Speaking of them, Mary took our little ball of fire into the vet for the first time last week, where he got his nails trimmed and his first shots.

Oh, and he was also anally probed. Mary said he went stiff and his eyes went wide at that point. That’s probably the look most men over 50, myself included, get when we have our prostates checked.

As I type this, Finn the fur ball remains insane when it’s play time, but he’s calming down a lot faster and realizing when it’s sleep time.

He’ll face bump my chin if I’m in the recliner, rub his face along my goatee a bit and cuddle up on my chest for a time before shifting into the seat beside me. That’s part of my bonding time with the little guy.

I appreciate those moments, because when he’s in full play mode, look out. He’s a whirlwind, coming at things from all directions.

Mary bought the cat a little nylon teepee, and we have a toy looped over one of the poles at the top. He treats it like he’s at times a mover, a squatter, or a one-cat demolition team. And it’s mostly the latter.

I’ve seen him fly into the living room and scooch underneath the teepee – not inside it—and shift it around the room.

He’s also gone inside and napped half in the thing.

But mostly, he’ll attack it until it’s flattened. He’s taken it down from below, getting under it before trying to pounce on it. He’s crushed it from above, jumping onto the top of the poles until he gets it to tip over. And Finn’s dropped it from inside, sort of like the apartment building implosions we’ve all seen on YouTube.

The little guy dashes into the teepee and jumps straight up. Yet he seems a bit surprised when the thing folds up on top of him. Go figure.

Eggs in the forecast?

As mentioned, we hung out at Eggless Chad’s on Sunday. Always a good time. The teens get to enjoy the pool and the hot tub, while we adults hang out under a patio umbrella and enjoy the breeze, both from Mother Nature and from our conversation.

Every time we sip beverages at Chad and Charlene’s, talk inevitably turns to the Big Green Egg. We’ve mentally designed Chad’s Egg table many a time.

And this time around, one of his neighbours stopped by and got caught up in the Egg conversation. He loves to barbecue, so he naturally became intrigued by what the Egg has to offer.

I have a feeling he’ll have to experience the taste of the Egg firsthand and see how versatile it is.