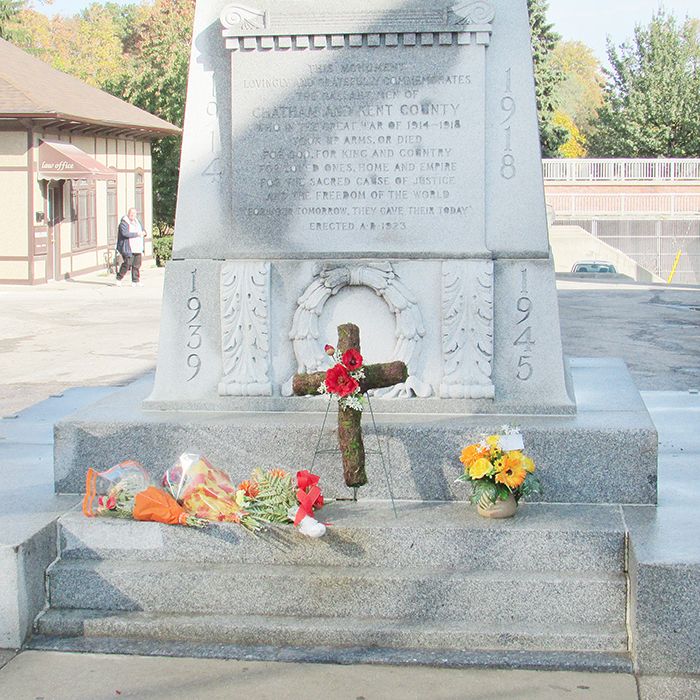 Editor’s Note: This is the second of a three-part series on the history of the Chatham Cenotaph by Jerry Hind: The third part will follow next week.

Chatham and the County of Kent, along with the rest of post 1918 war Canada were trying to get back to normal living. The Memorial Committee and the 24th Kent Chapter IODE remained involved in the Soldiers Memorial. The structure was finished but it needed some beautification and the committee members wished to have a German souvenir from the war placed in the area of the cenotaph.

Sometime in 1924 two German field pieces arrived in Chatham, as the photo shows, and the other piece was located in Tecumseh Park. Landscaping was completed between 1925 and the beginning of the Great Depression on 1929.

I have not been able to locate any document that shows when the “Memorial Committee” disbanded but it is reasonable to believe that since the Great War was the “War to End All War”, they must have felt that their work was done with the dedication of the Soldier’s Memorial and Square.

The soldiers, airmen and sailors of the Great War had been forming branches of the British Empire Service League, later to become the Royal Canadian Legion. Remembrance Day had replaced Peace Day and the Act of Remembrance was held every 11th of November at the Soldiers’ Memorial at the north end of 6th St., rain or shine. The 24th Kent Regiment Chapter, renamed the Kent Regiment Chapter in the mid-1930’s, was involved in a re-beautification of the memorial in the mid 1940’s.

It must have been a very personal time for those who lost sons, husbands or fathers in a war so far away. There were tours arranged after the end of the war to visit battlefields and gravesite, not always the permanent manicured ones you would see today cared for by the Commonwealth War Graves Commission or their name embossed on the Vimy Ridge Memorial or Menin Gate in Ypres, Belgium for those with no known grave.

Once again war clouds were rising over Europe as Hitler’s Germany was preparing for the victory that eluded them in 1918. The carnage of the Second World War would connect with the Soldiers’ Memorial. In Kent County, many of the towns and villages had erected their own cenotaphs and memorials.

My earliest memory of a Remembrance Day would be 1948 or 1949 with Branch 28 of the Legion on Victoria Ave. at Barthe St. All of the flags, the pipe band and the veterans of the two Great Wars would march up Barthe across the 3rd Street bridge, and then down King Street to the cenotaph. My dad was a veteran of WWII and I strained to see him march past. By the time the parade was halfway down Barthe it was time to head off to the cenotaph for the ceremony.

I’m not sure when the parades ended we had moved to the country and although my dad went every Remembrance Day. He did not talk about the war but when I asked him about why he always went he said, “Remembrance Day is not for the veterans but for all of those who went overseas and never became a vet.”

At some point the Remembrance Day service at the cenotaph ended and was moved indoors, first at the Chatham Armoury, then to the W.I.S.H. Centre followed by the Kinsman Auditorium. At least the Armoury and the Auditorium had had some connection with the wars.

On 8 April, 1988, the two Royal Canadian Legion Branch’s, 28 and 628, approached the City Council of Chatham to seek approval to “refurbish the cenotaph grounds”. They wanted to replace the “granular base surrounding the monument with a decorative brick surface”, estimated cost of $2,000. This was approved. It also indicates that the City had taken over the responsibility for the cenotaph and memorial square.

Though the cenotaph was still used for the display of wreaths that the Cadets or the Essex & Kent retrieved from indoor venues, the public service of Remembrance was not being conducted at the Soldiers Memorial on 6th Street. It would languish, nearly forgotten, for two decades.