Chatham-Kent Mayor Randy Hope is dreaming big and hopes others will share his vision that now is the time to push for high-speed rail across Ontario, and eventually, Canada.

“We have new government planning to spend $60 billion in infrastructure and high speed passenger rail needs to be part of that discussion,” he said. “The future is now.”

Hope is envisioning an elevated high-speed rail line using the 401 corridors from Windsor to the Quebec border wherever possible.

“We don’t need to chew up more farmland; the infrastructure and links are already in place and the technology is moving ahead rapidly,” he said.

“What if you could live in Chatham-Kent and commute to the GTA?” Hope continued. “There are thousands of people who would jump at the chance to live in a peaceful, beautiful rural setting but can’t because of transportation issues. It could reverse the declining population rates in rural areas, ease congestion in urban areas and reduce carbon emissions from cars. All it takes is vision.”

Hope said the idea of high-speed rail was being discussed when he was elected to the provincial government in 1990.

“Since that time, Ontario and Canada have been eclipsed by Europe and Asia,” he said. “We’re the second biggest country in the world (in land mass) and we haven’t invested in a form of transportation that could transform us.”

Hope said transportation has always been a leader in economic development.

“From the Canadian Pacific Railway in the 1800s, to national highway systems 75 years ago, transportation has opened this country to growth. Now, for some reason, we aren’t moving ahead.”

In order to be an advocate for the cause, Hope said he has chosen to use high-speed rail on his trade trips to China.

“I felt I couldn’t really advocate for it unless I tried it,” he said. “I boarded the train, my luggage was loaded on separately and all I had to do was go through a quick security check and I was on my way.”

He said the train travelled between 170 and 270 kilometres per hour on cement rails and was much smoother than conventional trains.

“It’s relatively silent; it’s so smooth I was able to shoot video and it’s a relaxing way to travel,” he said. “The advantages are numerous.”

With Ontario overproducing electricity and selling it at a loss, Hope said the province could divert some of that to high-speed rail.

“The federal government in the U.S. has committed to the idea of linking all major cities with high speed rail in the next two decades.

“How long are we going to remain a backwater influenced by those who have vested interests in the status quo?” he asked. “It’s time we realized that electrical energy is a renewable resource and we need to begin to wean ourselves off of oil while we still have time.”

He said the next step is to assemble more local support and begin working it through the political system.

“We don’t have local government representation but the idea itself has tremendous potential,” he said. “Everyone can see it’s the way of the future, now we just need to act on it.” 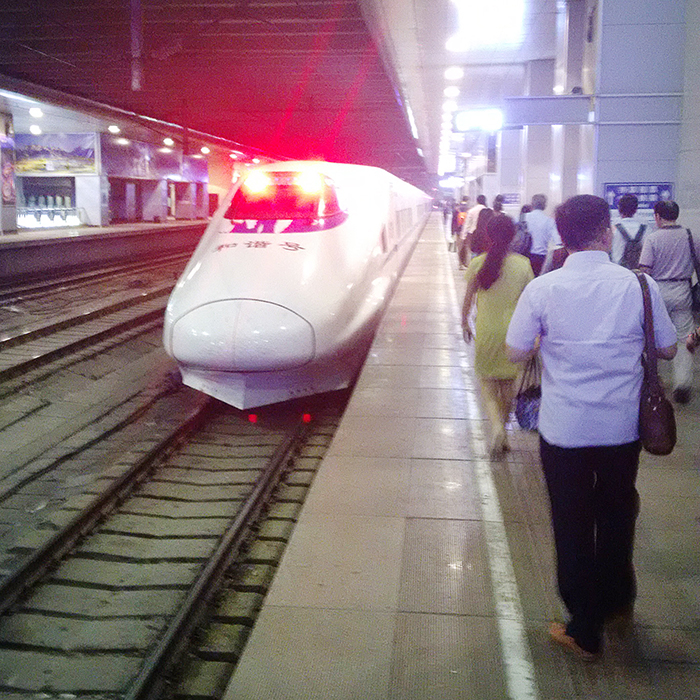