In one fell swoop, the municipality suddenly ran out of industrial land in Blenheim, and the South Kent community will soon be home to a massive industrial condominium project.

Municipal economic development staff say there is nothing like it in the country. Brightenview Development International, of Saskatoon, Sask., is going to build a $45-million, 680,000-square-foot facility in Blenheim’s industrial park, chewing up 34 acres; all remaining municipally owned industrial land in that community.

“The thing I like about this is no one else in Canada has this. It is absolutely unique,” Michael Burton director of economic development for Chatham-Kent said.

The municipality hosted an unveiling at the Hyland Drive site Friday.

The huge building – which is being called the Global Development Centre – is hoped to eventually be home to as many as 80-100 different offshore businesses. The concept, according to Burton, is for Brightenview to build the structure and supply support for offshore small- and medium-sized businesses to the point that all they need to do is bring their manufacturing knowledge with them and they’ll be able to begin operations.

“It’s almost a condominium kind of thing,” Burton said. “It will be for companies abroad to come in and establish operations. The businesses can bring their technology, set up shop and 30,000 sq. ft. of support services will take care of everything else.”

The centre will have 400,000 sq. ft. of manufacturing space, 250,000 sq. ft. of shared warehousing, and 30,000 sq. ft. of office space that Brightenview will use to provide support to companies to deal with various levels of government, as well as providing numerous other areas of operational assistance.

“When we go talk to a company, we can say we have a site that can take care of all their business services,” Burton said. “All they have to know is how to make their widgets.” 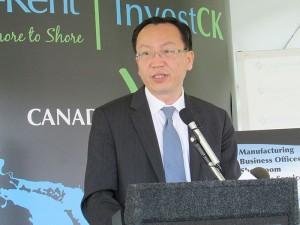 “The idea is to let international manufacturers do what they do best – manufacture,” Zhou said. “Strategic development, business development, marketing, communications, after-sales service, and buyer matching, we will help them with all of it. The new GDC will provide a full spectrum of support.”

Zhou credits the proactive leadership of the municipality, crediting Mayor Randy Hope and South Kent Coun. Art Stirling, as well as the economic development team, for attracting his company here.

“They have made a very significant effort to actively seek out global investment,” he said. “They understand what it will take to attract that business.”

Zhou said the municipality has “all the important factors” in what he wanted in a host community – a pro-business environment, a welcoming community, having a good quality of life, with an available skilled labour force, and a close proximity to the U.S. market.

“It all makes this location very desirable,” he said.

Burton said Zhou looked at numerous other Canadian locations, including the Niagara region, Windsor and Vancouver, but opted to come here.

Zhou admitted the search was coast to coast.

“But this is almost the perfect solution.”

In regards to the timing of the announcement, Burton said this is not some project that has been in the works for years, only to come to fruition just prior to an election. He said talks only began in earnest in the spring and the project quickly came to life.

Lorne Nystrom, a former federal MP, is the vice-president of government operations for Brightenview. He said discussions over the concept began some time ago between the mayor and himself in Shanghai, of all places.

“The team from Chatham-Kent liked the platform Mr. Zhou had,” he said. “It’s a new vision that will diversify the economy in Chatham-Kent and provide jobs. We think this is the right place to do it and the right thing to do.”

Burton said the hope is to have as many as 400-500 people working in the various businesses when the centre is at capacity. He anticipates that would mean another $60 million in outside investment.

Burton said there are similar and even larger industrial condo sites elsewhere around the globe, but nothing in Canada, and perhaps North America.

As for setting up shop in Blenheim, he said it is because the industrial park is located in that community.

“It is in a nice community that these folks can be a part of,” Burton said.

He and the economic development team are rubbing their hands in anticipation over the centre.

“We’ve talked to 80 companies in China that would be excellent candidates for this,” he said. “They’ve got the cash to expand into North America, but they don’t speak the language and aren’t familiar with what they need to do to establish themselves here.”

He added Zhou, a Chinese-Canadian, has leads of his own as well.

“They’ve got some people lined up,” Burton said. “We’ll start to farm our contacts too.”

Those contacts are overseas in India, China and Europe, he said.

Stuart McFadden, deputy director of economic development for the municipality, sees the centre as a magnet.

“This is a huge tool for us from an attraction standpoint,” he said.

Burton believes the centre will funnel business to Chatham-Kent, and much of it could eventually pour out of the centre into other parts of the municipality.

“If these companies are successful, they will branch out into their own facilities, and new (companies) will come in,” he said.

Zhou hopes to have construction complete by spring of 2016. 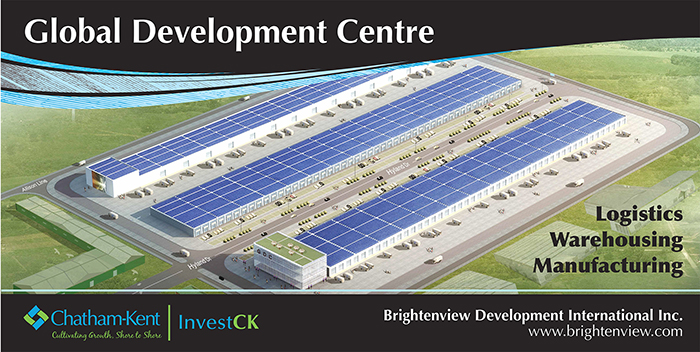