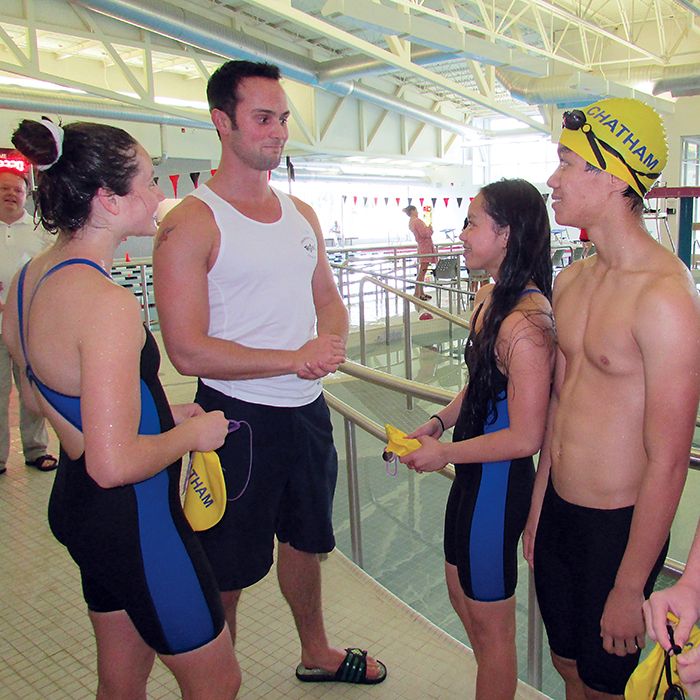 Chatham Pool Sharks head coach Kyle Pinsonneault, shown here with several team members at a home meet in October, is stepping down to focus on his business. The team named Kim Wood as interim coach while it searches for a replacement.

The Chatham Pool Sharks are in the market for a new head coach, after their current coach stepped down to focus on a growing business.

Kyle Pinsonneault resigned after two and a half years leading the Sharks. He said his business, Canadian Executive Search Group Inc.,  requires his full attention.

The Sharks are in the midst of a feeding frenzy of sorts, which has Pinsonneault proud. He said the team is full of quality swimmers.

“They’ve never been this deep in many, many years,” he said. “Our results at team championships three weeks ago were the best since the late 1990s. There are a lot of good kids on the team right now.”

While Pinsonneault has enjoyed watching the swimmers grow, he knows the time is right for his exit, for multiple reasons.

“I’m leaving them in a good spot. I’m going to still be a volunteer,” he said. “But as a paid full-time coach, I just can’t make that commitment anymore.”
Former head coach Kim Wood will fill in until the Sharks can find a replacement, Pinsonneault said.

Shannon Sasseville, vice-president of the Sharks,  said the organization is going to miss Pinsonneault, and is lucky to have Wood able to fill in for now.

“It’s unfortunate that Kyle’s leaving, but considering his busy life and how the business he’s building is growing, it’s understandable. And we respect his decision that he doesn’t want the kids suffering,” she said. “Kim is a very experienced coach and an accomplished athlete.”

With the interim covered, Sasseville said the difficult task is finding a full-time replacement for Pinsonneault.

“We’re putting the feelers out there looking for someone well qualified in competitive swimming,” she said. “When it comes to swim coaches, there’s not an infinite amount across the province.”

She remains confident they’ll find a suitable replacement, as the recent success of the Sharks is a strong selling point.

“We are pretty confident because our team is well ranked across the province. We have several high-calibre swimmers,” she said.

Pinsonneault is proud of the depth that’s developed within the Sharks during his time with the swim team, but he’s also very proud of one swimmer in particular – Maddy Broad, who picked up four first place finishes at the Canadian Age Group Championships this past summer in Montreal.

“Maddy winning four national titles, you never see someone win four at one swim meet. That’s so rare,” he said.

Broad was named the 2013 athlete of the year by the Wallaceburg Sport Hall of Fame, and Pinsonneault said he’ll be on hand at the dinner Jan. 25 when Broad receives the accolades.