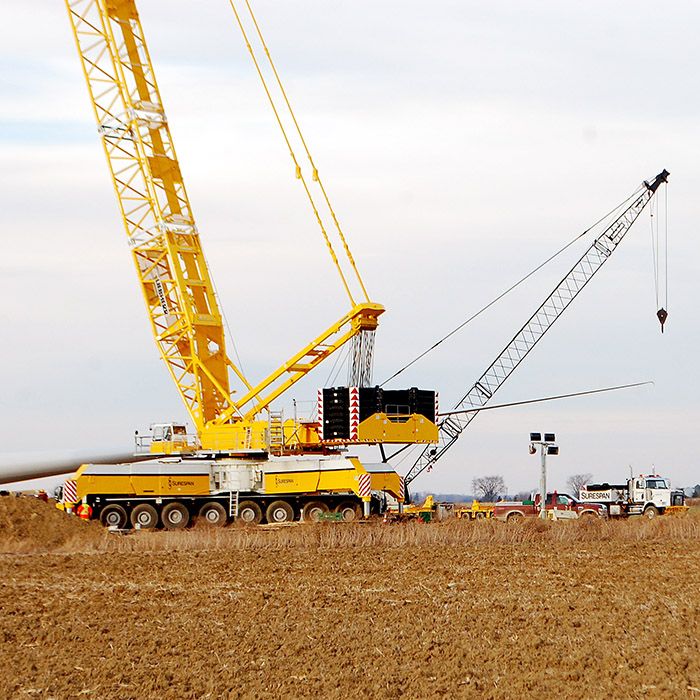 By Jeff Carter, Special to The Chatham Voice

A giant crane now working at a wind farm development just south of Highway 401 in Chatham-Kent is the only one of its kind in North America.

According to the CEO of Surespan Wind Energy Services, the Liebherr LG 750 is roadworthy, capable of traveling between turbine sites at up to 80 km/h. That’s a benefit to farmers concerned by soil compaction from conventional, lattice-boom cranes “walking” across their fields.

“With conventional crawler cranes, we’re not able to walk across farms because of that,” Jason Dashney said. “And with a crawler crane, it takes three days for a teardown. It takes just 12 hours to completely relocate the LG 1750.”

Two smaller cranes are required to disassemble the big crane.

Depending on the circumstances, only a partial teardown may be required to move it, Dashney said. That takes about six hours.

The LG 1750 came to Halifax from Europe by sea and was moved overland by rail to Ontario. It arrived at the South Kent Wind Farm project near Chatham in June. It’s being used as the main crane for the construction of 124, 2.3-megawatt Siemens turbines.

The LG 1750 is lattice boom crane with a compact chassis and eight axles. It is described by Liebherr as a “heavy duty crane for versatile operational conditions.”

In the case of the South Kent Wind project, the crane is being moved between the turbine sites by access lanes and municipal roads.

The maximum lifting capacity is rated at 1,653,750 pounds at a radius of 22 feet, according to the Liebherr website. It can lift to a height 633 feet and has a maximum radius of 445 feet.

Four hydraulically folding outriggers travel with the crane to make up the 16-metre-by-16-metre support base.

The job of the LG 1750 is to complete the structural installation of the turbines that are almost 100 metres above the ground at their hubs.

“We put up the top two tower units, the nacelle and the rotor assembly and blades. It takes about six hours,” Dashney said.

Dashney expects the crane to be working in Chatham-Kent until January. That’s when construction for the South Kent Wind Farm is expected to be wrapped up.

Once complete, the 124-turbine project will be the largest wind farm in Canada outside of Quebec. Roughly 500 jobs are being created during the construction period.

Once the wind farm is commissioned there are to be 20 permanent positions.

It is estimated $16 million in property tax revenue will be created over the 20-year contract period for the power generation.

Home market cooling off in C-K