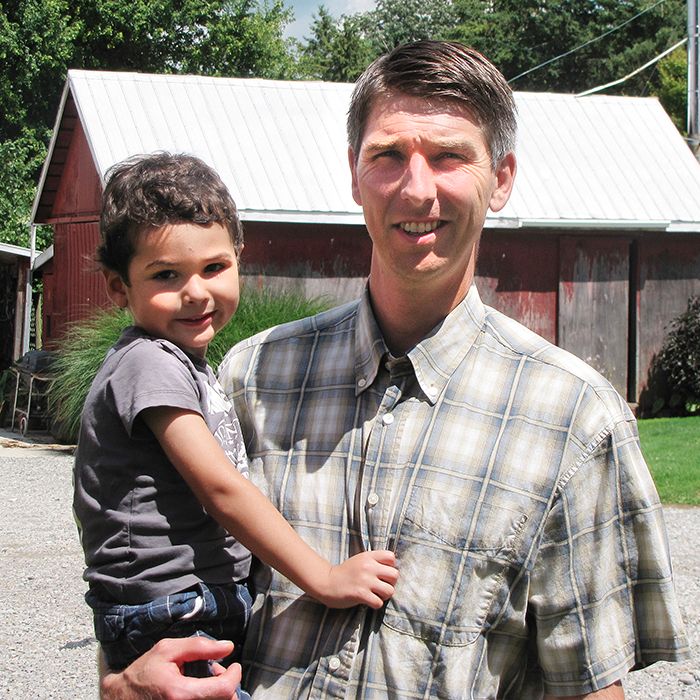 Local farmer Paul Spence is making a name for himself in local food circles as a culinary farmer.

In fact, his name appears right on the menu beside a chicken entrée at The Only On King, a high-end restaurant in downtown London.

Spence’s deal to supply the food and also be identified with it is part of a growing trend in which chefs directly connect with farmers.

“When you say the farmer’s name and the location, you’re superseding what local is because you’re giving (the customer) the ability to look him up on the Internet, drive out to his farm and talk to him, instead of it being just locally sourced,” said Spence, who with his family farms near Kent Bridge.

The fifth-generation farmer, who raises goats and chickens, never envisioned he would have his name on a menu or be talking to chefs and their customers about how their food is produced.

Moreover, while studying agriculture at the University of Guelph, he didn’t think he would come back home to farm.

While a series of events have contributed to his current business model, a key moment occurred when he married his wife Sara, who is from Ecuador.

Spence was blown away by the quality of the tasty meal served by his in-laws at their reception.

“Her parents put on this dinner and the sausage and the food was just phenomenal,” recalled Spence. “So I came back here and tried to figure out why I can’t find that type of food here.”

Combining the food of his wife’s culture and his farming methods of growing his own feed and producing the meat without growth hormones or additives, Spence established Lo Maximo Meats and sold the products at farmers’ markets in London.

The interaction with his customers and “foodies” proved to be invaluable while building a reputation for his business.

“They wanted an experience and that got us thinking about food as an experience, not to just buy it at the grocery store and eat it,” said Spence, whose farm has now been featured in many online articles and in the Summer 2013 issue of Edible Toronto, a magazine that covers local food in the Golden Horseshoe.

The couple started hosting South American-style barbeques – Experience Casa Latina – at a one-room schoolhouse near their farm to give people a different food experience while promoting the food and its culture.

Spence also conducts meat workshops at the Pristine Olive Tasting Bar in London to explain how he produces his food.

It was through those workshops that he connected with the chefs at The Only on King.

With the restaurant consuming almost all he can produce, Spence no longer sells at the farmers’ markets.

As part of his farm’s evolution, he has started to grow heritage grains – varieties grown by our ancestors – like Red Fife wheat that was grown in the 1800s.

In addition to growing the grain for food or feeding it to his animals, Spence has been talking to craft brewers, including a group that wants form a microbrewery in Chatham, about using Red Fife for their beer.

“Chatham-Kent produces ridiculous amounts of food, but we’re invisible,” said Spence of C-K’s food business. “It goes on the back of a truck or to a distribution centre. People want stories; people want connections. All the other municipalities are figuring this out; we’re slowly getting it.”

To that end, Spence is taking part in the second annual C-K Table, an event celebrating the quality and diversity of food produced in the area.

The event includes a gala dinner on Sept. 21 at Parks Blueberries and Country Store, and market and farm tours on the following day.

Details are available at www.cktable.ca.

For more on Paul Spence, his website is at www.experiencecasalatina.ca or call Lo Maximo Meats at 519-365-9791.