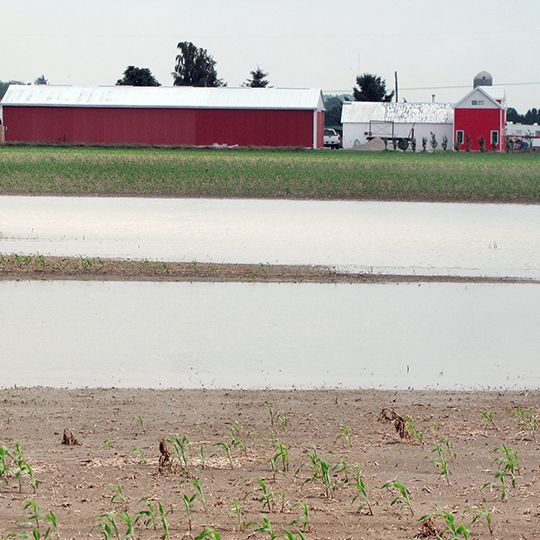 The unrelenting rain in parts of Chatham-Kent have left many farmers shaking their heads in frustration and raised concerns about the quality of this year’s major crops.

In his 32 years in the farming business, Dale Cowan, the senior agronomist at Agris Co-op, has never seen such a drenching in terms of amount and intensity.

“We’re getting storms of four to five inches in an hour and a half or less,” said Cowan. I have seen four-inch rains, but I haven’t seen three in the same week.”

Cowan said an area from north of Chatham and south of Wallaceburg to Tupperville appears to be the hardest hit.

“If you look at the last 15 days, on average, you had an inch of rain a day. So we’re just not drying out. It’s really starting to play havoc on the crops,” he said.

The problems include sugar beet fields that have been washed out, farmers not being able to get into the tomato fields to apply crop protection products and conditions that are ripe for a devastating disease in the wheat crop.

In saturated soils, the roots are suffocating and growth is starting to be limited as the crop moves into the critical stage of tassel emergence.

“We don’t want a whole lot of stress at that point; it’s going to start impacting on yield.

With saturated soils, there is also the risk of losing the nitrogen that was previously applied. The nitrogen is needed to help feed the crop before harvest. “We’re going to see some yield impacts from the excessive water, limiting nutrient uptake and growth and just putting general stress on the plant at a critical time.”

The water-logged fields are causing root rot in the plants. Also, the nodules that normally fix nitrogen are dying off because there isn’t air in the soil from which to draw the nitrogen. The result is the affected soybeans are turning yellow. “That is just going to start impacting on yield heading into the reproductive phase of flowering.”

Cowan said the plants are struggling from receiving too much rain and can’t resume growth. Another problem is that the root rot can cause fields to lose several soybean plants, which will ultimately impact on the final yield.

Disease is the main concern, particularly fusarium head blight. It thrives in warm, moist, humid weather. Crops with certain levels are downgraded by the buyers. The disease can also produce a toxin (vomitoxin) that renders the crop unfit for animal and human consumption.

The wet fields are also a concern for harvesting the crop.

“We’re waiting for ground conditions to improve so we can get equipment in there and harvest. But basically, (the problem) is an impact on the crop with fusarium head blight…yield and quality are going to suffer.”

Janice LeBoeuf, vegetable crop specialist with the Ontario Ministry of Agriculture and Food in Ridgetown, explains the impact on sugar beets and processing tomatoes.

Some of the sugar beets have been flooded, killing the crop in the field. The surviving crop will be at risk for diseases that affect the roots.

Tomatoes are also at risk for root diseases in some fields but conditions are also ideal for the development of bacterial diseases on the foliage and fruit.

“I anticipate that we are going to see some yield reductions due to disease, even beyond what we have seen in flooded-out sections,” said LeBoeuf.

Crop management options for diseases and weeds have also been limited because wet fields are making it a challenge to apply crop protection products.