Sometime between Dec. 30 and Jan. 2, someone entered a warehouse at the Speed-D-Mart car wash on Bloomfield Road in Chatham and stole a refrigerator valued at $2,000.

Through investigation, police learned that the driver they believe was responsible for the collision was also suspended from driving.

No one was injured. Total damage was estimated at $6,000.

A 28-year-old Chatham woman was charged with driving while under suspension and failing to yield the right of way from a private driveway.

Chatham-Kent OPP officers are investigating a break-in at the public works yard on School House Line in Moraviantown.

They received the call Jan. 2 and learned that someone entered the property between Dec. 27 and Jan. 2.

The culprit(s) made off with an estimated $4,000 in tools from one of the buildings.

Should you wish to remain anonymous, you may call Crime Stoppers at 1-800-222 – 8477 (TIPS) or send an anonymous online tip to www.crime-stoppers.on.ca where you may be eligible to receive a cash reward of up to $2,000.

Sometime late last night or early this morning, someone stole this black 2007 Ford F-150 pick-up truck from a residence on John Park Line in Wallaceburg.

The truck was last seen with Ontario license plates BC42 826. 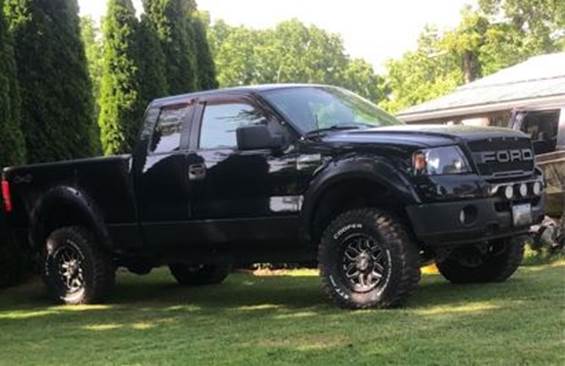 Yesterday morning, police responded to a two-vehicle collision on Lacroix Street between Mary Street and King Street in Chatham.

A 73-year-old Chatham man was charged with careless driving.

Yesterday afternoon, police responded to a collision with a deer on Communication Road between Allison Line and Drury Line.

No one was injured. Total damage was estimated at $4,000.

Last night, police responded to a two-vehicle collision on Dufferin Avenue between Dauw Avenue and Bruinsma Avenue in Wallaceburg.

A 79-year-old Wallaceburg man was charged with making an unsafe lane change.

Yesterday afternoon, police responded to the Real Canadian Superstore on St. Clair Street in Chatham for a shoplifting complaint.

Through investigation, police learned that the woman concealed several items on her person and left the store without making any attempts to pay for the merchandise.

Officers located the woman a short distance away and she was arrested.

A 34-year-old Chatham woman has been charged with theft, possession of stolen property, and failing to comply with her release conditions as she was currently bound by conditions not to attend that grocery store.

She has been held in custody pending a bail hearing.