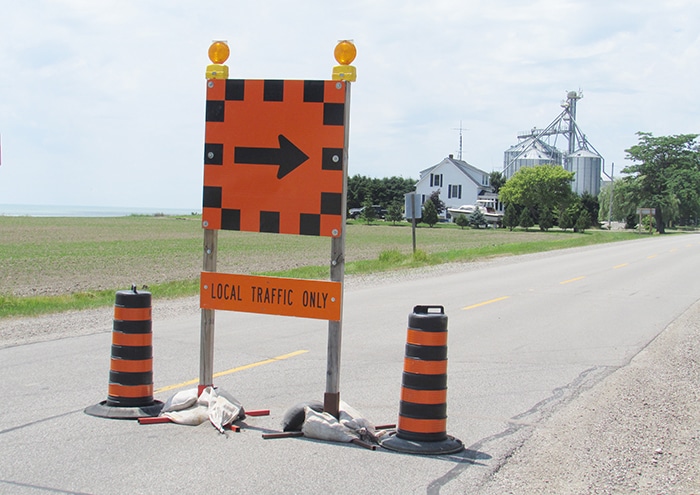 A tomato farmer affected by the Talbot Trail road closure due to shoreline erosion is calling council’s handling of the issue “a joke.”

At last week’s virtual meeting, council voted to increase the scope of the Talbot Trail environmental assessment, costing the municipality additional $201,422. The extra work means farmers and residents will have to wait until at least 2023 before they see construction work that will help with the area’s erosion problems.

In July 2019, a portion of Talbot Trail by Coatsworth and Stevenson was closed because the structural integrity of the road has been compromised in spots.

“So what that is going to do is basically going to provide us with that overall recommendation for all of Talbot Trail – right from Erieau to Wheatley – the recommendation will then fall into our capital plan, subject to the budget in 2022,” explained Chris Thibert, director, Engineering and Transportation Services.

The report is expected to be delivered to council in late summer or early fall of 2021. BT Engineering Inc. was awarded the contract last December.

Throughout the closure, farmers have been using Concession Lines 2 and 3 as bypass routes.

“It screws up a lot of things,” said farmer Greg Deboer. “A person on a bike almost got hit the other day because of all the dust caused by the trucks. So I called (the municipality) to complain. It’s beyond a security issue.”

When incidents or complaints like that occur, the roads are closed or a “no trucks allowed” sign goes up midway through the farming season, according to Deboer.

He added that either no one follows the signs or the trucks that do have to use routes further away from their destination, adding 15 minutes to their travels per run.

The closest bypass route (Concession Line 2) adds five to 10 minutes per run. Deboer does a handful of runs a day, but he says some large farmers can do up to 30. That adds a 2.5 to five hours to the working day using Concession Line 2.

If the structural integrity on the parts of Talbot Trail which remain open start to fail, staff said they will follow the same procedure as the Coatsworth section and shut them down until the municipality comes up with an ultimate solution. The report will either recommend that the road be moved or to fix the existing corridor to address the issue of the slope instability.

In the meantime, Deboer would like to see Concession Road 2 paved to help trucks with the wear and tear and more importantly to protect citizens from the dust.

Thibert said the direction to pave a gravel road has to come from council.

West Kent Coun. Mark Authier, the lone vote against extending the scope of the Talbot Trail environmental assessment, brought up paving the road unofficially. He said he will consider officially bringing it forward later in the winter as the closures have dragged out longer than expected and has been hearing some safety concerns as well.

“To find out it’s going to be that much longer is even worse for residents in the area and anyone who uses Talbot Trail. An actual tractor had to go in a ditch, because that was all he could do because a semi was going toward him,” he said.

Expanding the road to nine metres, widening the intersection at Coatsworth, laying down asphalt, moving the drainage and hydro lines could cost taxpayers around $3.6 million.

Deboer said it would be worth it because he thinks that the municipality is currently spending a fortune just maintaining the gravel road.

Public Works personnel are out there a minimum of once a month. Attempts by The Chatham Voice to learn from the department what the upkeep costs are on that section of roadway were unsuccessful by press time.

Thibert said at the earliest the pavement could be completed by Summer 2021, which would save truckers two years of wear and tear.

“Concession Line 2 is a short term type of plan to get around the closure area. It’s not very favourable for the future goals because where it ends off at Stevenson it is concerning. Unfortunately, it’s all based on funds and the council’s direction. But if the goal is to secure the (Talbot Trail relocation) funding ASAP then that should be what we focus on,” Thibert said.

It was also noted at the council meeting that 2023 is the earliest date that road repairs could begin. Funding from senior levels of government will also play a role in how quickly repairs can start, according to Thomas Kelly, general manager of infrastructure and engineering services.

According to the Chatham-Kent Lake Erie Shoreline Study, prepared by Zuzek Inc., costs to realign roads suffering from erosion and to flood proof residential areas could cost up to $217 million.

READ MORE: Adaption for Erie shoreline can cost up to $217M: Zuzek Report

READ MORE: Who foots the bill for Erie shoreline protection?

“We’ve had meetings with our local MPs as well as our MPPs and at this time, it’s been discussed, but there is no funding available from upper levels,” Kelly told the council. “That’s the answer we’ve received for quite some time now. Certainly COVID has put a lot of stress as well into the system. I’m really not optimistic that we’re going to hear of any announcements on the short horizon either.”

Mayor Darrin Canniff said municipal officials have made the premier aware of the concerns and sent a letter to the official opposition as well.

“I think the current status quo is definitely a challenge, and its significance can’t be under emphasized as well,” said South Kent Coun. Trevor Thompson.