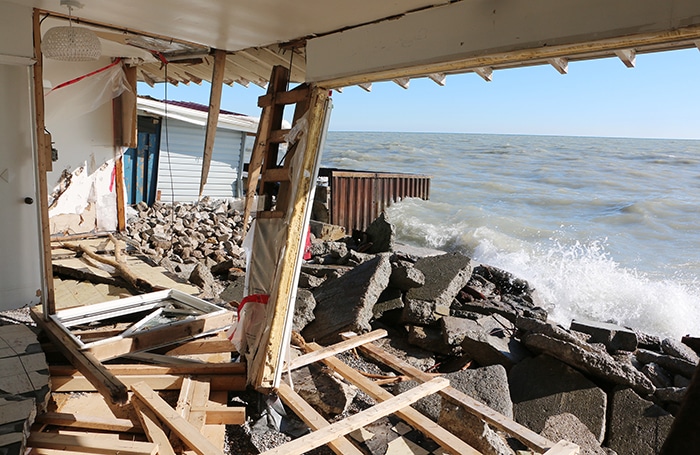 Will infrastructure work kick-start our economy?

Chatham-Kent may be able to solve two problems – Erie Shoreline protection and stimulating the economy – at once.

But it would take serious help from senior levels of government.

Financial stimulus for infrastructure projects that are ready to go may be a key to reigniting economies as the provincial and federal governments navigate out of the looming recession.

At Monday night’s council meeting, C-K councillors unanimously passed the recommendations and priorities for Erie Shoreline protection based on a study by consultant Peter Zuzek.

On the list of priorities was Erie Shore Drive, which alone would cost between $22.5-$31.7 million, at the lowest quote. The total highest cost quoted in the report to protect the entire shoreline reached $217 million.

Chatham-Kent CAO Don Shropshire said the municipality would gladly welcome infrastructure stimulus with a climate change lens on it from upper levels of government.

“Government has said in public statements that funding for infrastructure would be there to pull the economy out of recession. That type of project is needed here and will stimulate the economy. It is really good, smart spending,” Shropshire said.

Chatham-Kent-Leamington MP Dave Epp concurred but said that in the past during recession, previous governments responded first to the infrastructure projects that were “shovel ready.”

“So I’m sending those signals to the municipalities in my riding on what projects are available and for lists of costs so they can quickly get ready for things like that,” Epp said, adding that no funding has currently been announced.

Shropshire said more maintenance work on Erie Shore Drive will be ready to go in a month or so and problem areas in Wheatley “can be shovel ready today.”

Other Erie Shoreline projects recommended in the report, such as realigning 35km of road on Talbot Trail, can take up to several months in planning alone.

READ MORE: ADAPTION FOR ERIE SHORELINE CAN COST UP TO $217M: ZUZEK REPORT

Epp said the federal government has an interest and jurisdictional responsibility for the navigable waterways at Rondeau Bay. The Species at Risk Act may also come into play as that falls under the Department of Fisheries and Oceans.

The municipality may be able to apply for funds through the Disaster Mitigation Adaptation Fund (DMAF), a $2 billion program that shares up to 40 per cent of costs for large-scale infrastructure projects to help communities manage the risks of natural disasters.

The DMAF program along with other federal funding projects was put on hold as the federal government postponed its March 30 budget release, due to the COVID-19 pandemic.

South Kent. Coun. Trevor Thompson said regardless of what the costs are, residents should focus on the bigger picture.

“When you talk about costs, there is also going to be a financial impact to losing those 500 homes. Their taxes will be spread across the municipality,” he said, adding that the municipality waived taxes for Erie Shore Drive residents for the remainder of the year, which cost everyone else $3.25 million.

“Also, if someone lost a home, they probably won’t buy another home in that community, or Chatham-Kent at all, so you lose the financial impacts for the community.  You lose the impact that those things have. When you only look at the price tag you lose the big picture.”

When Zuzek consulted the community on top priorities for shoreline protection, only 15 per cent of respondents said affordability for the municipality was at top of mind.

Chatham-Kent-Leamington MPP Rick Nicholls is adopting a wait-and-see approach before he sits down with environmental and agricultural ministries on what funding is available.

“These are decisions that have to happen on all four levels,” he said. “First we need to make sure everyone is on the same page before we move forward.”

While jurisdictions are mainly municipal and provincial, solutions need to come from the very bottom.

Terra Cadeau, president of the Erie Shore Drive Property Owners Association, representing more than 100 property owners, said some people who would be interested in buyouts, if they could get what they feel would be fair market value. However, the vast majority of individuals would prefer to find a solution to protect the shoreline and dike.

“We’re not naive to think that the government is going to find a pot of money to come and save us,” she said.

The situation on Erie Shore Drive is more unique than the rest of the shoreline issues that were included in the report. Around 1,600 acres of farmland near Erie Shore Drive used to be wet lands. The Drainage Act was used to build up the roadways to drain the water and create the farmland.

As a result of that, there is an opportunity through the Drainage Act for the municipality to get a solution funded.

Cadeau said the property owners would like to see the municipality use the Drainage Act to petition for new work to be done. The engineers would determine through the act all the people who would benefit from the work and every party would share in the cost proportionally.

“The entire existence along that shoreline was made by farmers at the township at the time. And they have a responsibility to maintain all that,” she said. “We’re not looking for a handout, but everyone (benefitting) should pay into the solution.”

“Shoreline protection is important for everybody in Chatham-Kent, and, yes, it’s going to come at a cost and there are going to be places we have to retrieve from but there’s also places where it’s going to make economical sense to protect,” Thompson said.