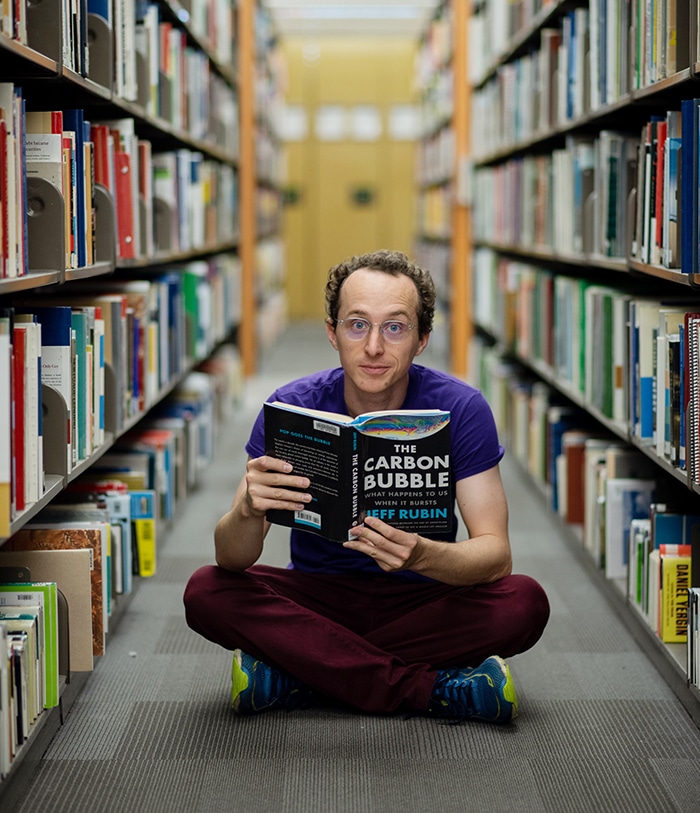 Chatham-Kent native Kurtis Baute, a scientist who shares information and experiments via social media, is shifting gears to focus on climate change. He’s saddened to see what has happened along the shores of Lake Erie, specifically along Erie Shore Drive. (Image courtesy Jana Josue Maclaren)

Chatham-Kent native and YouTube scientist Kurtis Baute is altering his focus on delivering scientific information to the public from one of general science to focus specifically on climate change.

He said his time spent in a “jar” – a one-man bio dome – where conditions left the interior with high levels of carbon dioxide and led to him seeking to learn more about climate change.

Baute’s foray into YouTubing with science information began in early 2018 when he placed 13,799 dominoes on the floor of his parents’ Maizex Seeds warehouse near Jeannette’s Creek and toppled them one after another while detailing the history of the universe, starting with the Big Bang Theory and ending at present day.

Since then, he’s released about a video a month using quirky methods to showcase scientific principles and real-life experiments, including creating the bio dome and charting mankind’s 42-million-year existence on Earth by running a marathon, a distance of 42 kilometres.

“When I did the jar project – how we interact with the air we breathe – and talked about climate change, I spent the next two solid months doing news interviews about climate change,” he said. “I did research on the subject for the next little while. I let the full magnitude of the issue sink in.”

And now he’s seeing the impact of climate change in his former municipality.

Between 1900 and 2015, precipitation levels in the Great Lakes basin has risen by nearly 10 percent. In U.S. states that don’t border the Great Lakes, the average increase was less than half, at four per cent.

“The Great Lakes region has seen more than double the increase in rainfall compared to the rest of the U.S.,” Baute said. “That’s why we’re getting extreme flooding events. And they will continue to get worse.”

Even those who believe in climate change can fail to comprehend how it will impact them. He said a prime and sad example of climate change is the erosion taking place along Lake Erie’s shoreline, and the closure of a section of Erie Shore Drive here in Chatham-Kent.

“People see climate change and think the big issue is going to be sea levels rising. People think if you are not on the coast, it won’t impact you. That’s not the case at all. Anywhere you live, you will be affected,” he said.

“I feel really badly for the people this is affecting right now. I hope we can support them and prevent more people from being in that situation in the future. We have to look out for one another,” Baute added.

The changing climate over the Great Lakes basin will impact everything from higher water levels and resultant flooding and erosion to lower crop yields, he said.

“In the Great Lakes basin, as it gets hotter, there will be more extreme rain events in the region. We can expect that’s just going to keep happening, and flooding is going to be a bigger and bigger problem,” he said.

Baute added climate statistics on the Great Lakes basin shows it has warmed up more than the rest of the continent.

“That’s because of the science of how these big bodies of water can hold and interact with heat,” he said.

Spring and fall can deliver increased rainfall, but the summers could wind up much warmer, Baute said.

“We have more days where you can get heat stroke. And now, it’s flooding that’s forcing people from their homes. Climate change could be affecting crop yields in the future,” he said.

Baute points to predictions that by 2050 crop yields could be reduced by between 10 per cent and 30 per cent in the Great Lakes basin.

“That’s make or break for a lot of people,” he said. “I grew up in a family of farmers. A 30-per-cent crop reduction is massive.”

Baute said what is happening along the Lake Erie shoreline shows people that climate change has arrived.

Still, many people continue to deny climate change, he said. Some say Earth has seen climate change in its millions of years of existence that was not influenced by humanity. Baute agrees.

“The planet has changed over time. But it has never seen the rate of change in terms of temperature ever. In all the history of geology, we’ve never seen this,” he said. “It has never changed how it has in the last 100 years.”

Yet people still deny climate change. Baute said the evidence is there to show that mankind is causing the problem.

“All the people who do this as a profession – study the climate as a job – they all say it’s being caused by us. The science is undeniable,” he said. “I wouldn’t go to my doctor and disagree with him over my diagnosis after they’ve run tests on me. I think most people wouldn’t, but they deny climate scientists.”

“I think we’re in a time where the evidence is so overwhelming that to deny it you have to look deeper at yourself and wonder why you are denying it.”

Baute said his research into climate change has led him to alter how he delivers messages to the public over social media. He’ll still use YouTube to provide information, but rather than detailed experiments, he’ll share details about climate change as he uncovers them.

It’s all related to his efforts to develop a feature-length film about the realities of climate change.