‘They would do the same for me’

Jan 15 • Feature Story, Local News • No Comments on ‘They would do the same for me’ 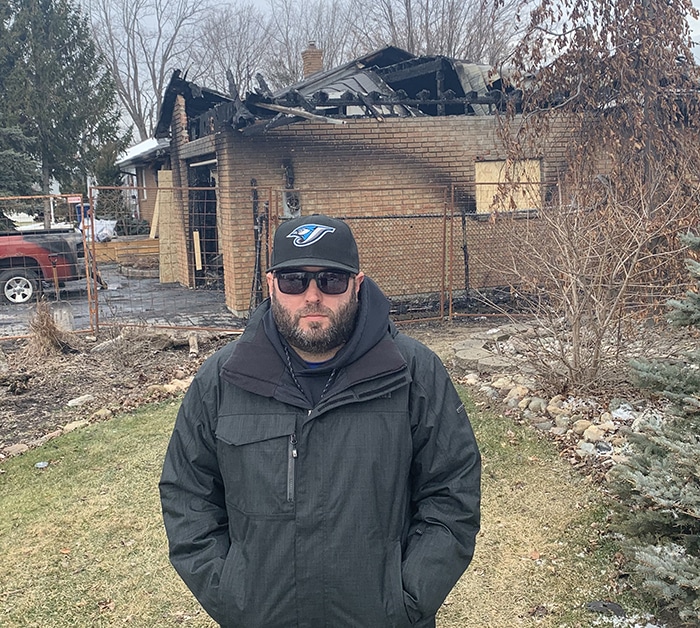 Matt Pelkey of Merlin pulled one elderly neighbour out of her burning home last week and made sure the woman’s husband was safe too. There were no injuries, but the home suffered heavy damage.

Matt Pelkey is normally at work in Chatham at 11 a.m. during a Wednesday. For his elderly neighbours George and Sharon Hope, it’s a good thing he was at home on the morning of Jan. 8.

Fire broke out at the Hope home on Erie Street in Merlin and quick thinking by Pelkey may have saved lives.

The 37-year-old Onbelay Automotive employee, who was working afternoons due to training, said he was watching TV on a snowy morning when he saw what he initially thought was a cloud of snow blow by the window.

“I thought it was snow, but I went to take a look. ‘I think that’s smoke,’ I thought. So I went out the front door to look and sure enough, ‘Yeah, that’s a lot of smoke,’” he said.

Pelkey ran, grabbed his coat, put on his shoes and headed next door to check on his neighbours.

“I ran across. The flames were coming right out of the garage. I ran around to the front door and started banging on it as hard as I could. It was locked. She (Sharon) came to the door, didn’t know what was going on. I grabbed her and pulled her out of the house,” he said.

Pelkey said his neighbour wanted to go back into the house to get her coat, but he instead gave her his, told her to not go back inside, and ran off to look for her husband, George.

“I was yelling for George, but I couldn’t find him,” he said. “I ran back around to the front to make sure she was safe. I ran back around and luckily I saw him banging on his patio door. He normally goes through the garage, but it was engulfed. I said, ‘George, George, she’s in the front!’”

With his neighbours reunited, Pelkey wasn’t finished. He said he went back to his house, grabbed a wrench and returned to the Hopes’ burning home to the natural gas valve and shut it off.

The fire did an estimated $300,000 damage, not just to the Hope home, but to the side of Pelkey’s house as well, as the new siding on the north side of the home melted due to the heat.

But no one was hurt.

Pelkey just downplays his role in ensuring his neighbours were safe.

“I just wanted to make sure everybody was OK,” he said. “I’m no hero. They would do the same for me. For anybody, I think you want to help your friends, your neighbours.”

Pelkey has lived in Merlin for the past five years with his wife Diane and their two children. He said the Hopes have lived there for decades.

« That looks cold! Tourism ideas flow with a Spark »