The Big Green Egg saw solid action in recent weeks, starting with a spiral ham. Friends Arlene and Pete wanted to invite us over for dinner. But they asked if I’d cook their ham on the Egg.

Armed with warm weather, I was in.

For anyone who has not “cooked” a spiral ham before, it’s really just warming it up, as they come pre-cooked. But when you do it on the Egg rather than in the oven, you can give it some wood smoke flavour.

I fired up the Egg, added the indirect cooking plate, topped by a drip ban filled with water, added wood chips to the coals, and plopped the ham on the grill right above the drip pan.

In an oven, you’d just get a mess and a dried up ham if you tried it that way. On the Egg, we got apple wood flavour added into the ham, and an easy cleanup.

As the Egg worked its reheating magic, I had tunes playing and a cold beer nearby. Pete and one son Tyler surprised me with a backyard visit (you don’t have to hang out in the backyard while the longer cooks take place on the Egg, but when the weather is nice, I certainly do).

Even with the drip pan, I still worried the ham might dry out. After all, you foil these things and cook them in a roasting pan in an oven.

But I needn’t have worried. We didn’t even bother with the glaze. It, and everything else Mary Beth and Arlene prepared, was delicious.

A few days later, we cooked a prime rib. It was a small one, just over four pounds. But there were only three of us that night.

I crusted it in coffee rub (thank you, John Schinkel!), set the Egg for about 300 F (I’ve done them at 250 F and 350F in the past, it just depends on how quickly you want things cooked), put in my Traeger meat probe and grill temperature sensors (again, thanks, Schinkels’) fired up the music, opened a brew, and sat back on a beautiful afternoon to enjoy the aroma and the yard.

The drip pan and indirect plate were in play, of course.

I cooked this one to about 132 F internal temperature. Anything between 130 and 135 is considered medium rare. It probably continued to cook for a bit past the point of being pulled off the grill, as all meat tends to do, so the exterior was medium and the middle was medium rare.

As the weather turns colder, the Egg may hibernate for a bit, but in the short term at least, it was in fine form. 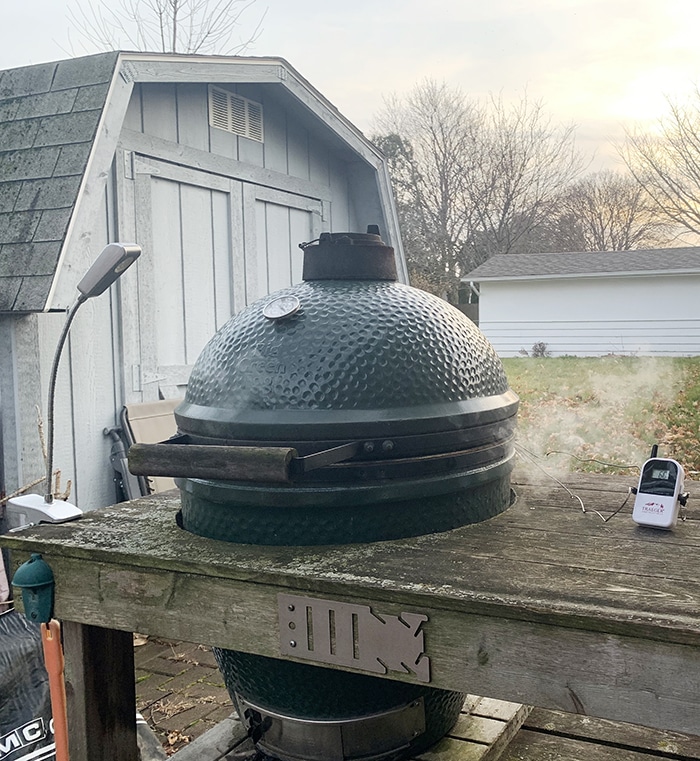 And like most any cat, he is drawn to our Christmas tree. In past years, he’s climbed up the artificial tree, laid on lower branches to the point they are permanently out of position on the tree and no amount of bending will get them back in place, and attacked all the sparkly bits.

A newspaper comic sketch once summed up the view from a cat’s perspective. The feline is atop a barstool, slumped over the counter at a local watering hole, lamenting that his family had put up a tree and placed sparkly balls and tinsel all over it, yet expected him to not play with anything!

That’s the truth, isn’t it? Last year, the tree went up right before Christmas and came down on Boxing Day after he wouldn’t leave it alone.

But this year, he behaved differently. And we only changed one thing.

This time around, we didn’t put tinsel on the tree. It had its lights and ornaments, but no silvery tinsel – reflective string in the eyes of a cat.

How can they not stay away from that stuff? And how many cat owners report scooping the litter box during the holidays, only to find tinsel in the cat’s stool? Sparkly poop. It happens all too often for those darned cats.

But this year, with no tinsel, Finn did not attack the tree. In fact, he took to curling up underneath it to sleep! Lights on or off, it didn’t’ matter. You could spot the critter at the tree’s base, content.

I cross my fingers that the tinsel factor continues to work in the future, or the tree will go up just before Christmas and come down as soon as the celebrations are over.

Heck, I’ll even give him a couple of treats. And speaking of treats, Santa brought the fur ball a small bucket of them over Christmas. He loses his mind for the things.

Have you ever seen the TV commercial where the cat hears its master shaking a bag of treats, stops whatever it’s doing and runs over for a nibble? Finn is even worse. He can be asleep in a bedroom at the end of the hallway when Mary Beth gives that bucket a shake, and Finn will come barreling into the living room right to her. If she doesn’t deliver in a timely fashion, a paw will come up on her knee offering encouragement. If that’s not enough, he’ll jump up on her and try to help himself.

The treat bin can’t be left out either, as he’ll knock it off the table to try to self medicate. If that doesn’t work, he will attempt to chew his way through the plastic.