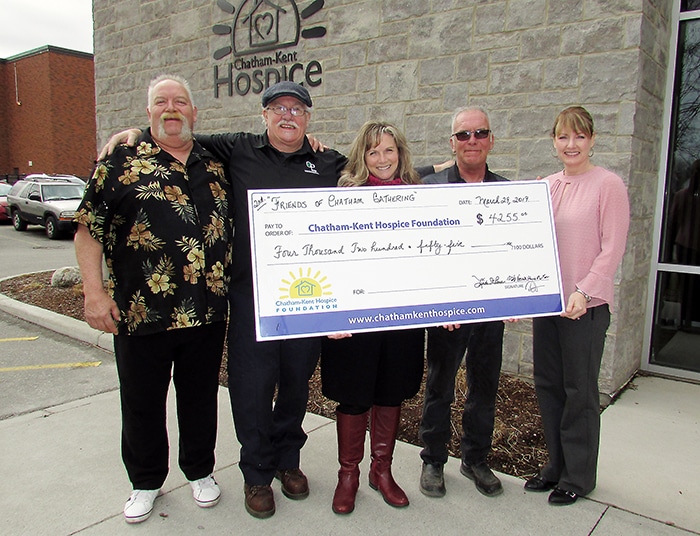 The second annual Friends of Chatham Gathering was more than just friends getting together to have some fun and enjoy each other’s company.

The event, organized by locals Ray O’Phee, Mike Dorner and Howie Morton, with hospice volunteer Linda St. Pierre, more than doubled the amount raised last year for the Chatham-Kent Hospice, and all through freewill offerings.

“Our Hospice fundraiser held March 9 was a huge success. We blew the doors off the place! All three areas were packed,” O’Phee said. “We were able to more than double our last year’s donation to $4,250. Needless to say, we are very happy.”

The three friends came up with idea for a gathering after meeting up after many years at the funerals of mutual friends. They realized it was great to see each other and wanted to meet up other than at funerals. The idea for the gathering was born, and after seeing how well the hospice looked after a friend when he was dying, they decided to add a fundraising component to the event.

“I was astounded we raised $2,000 the first year and had people come from as far away as Saskatchewan,” Morton said at the Hospice cheque presentation. “Then we more than doubled that amount this year.”

Dorner agreed he was amazed at the turnout, with approximately 500 coming in the doors of the Kent Belgian Dutch Canadian Club, which donated the facility for the fundraiser.

“Over 500 passed through those doors and the amazing thing was they all knew each other. Some of those people I haven’t seen in 40 years,” Dorner noted. “This year, we had a guy from New Brunswick attend who just happened to be in town during the Gathering.”

All three men agree that it is important to enjoy the people in your lives while you can still get together, instead of only meeting at funerals and in times of sorrow.

O’Phee said the age group he and his friends are in have them seeing too many people in the obituaries.

“We plan to do this once a year and we already have next year’s date lined up tentatively for March 7, 2020,” O’Phee said. “We also heard that our event has morphed into people from Windsor wanting to do this type of event too. That’s incredible.”

Jodi Maroney, Executive Director of the Chatham-Kent Hospice Foundation, accepted the cheque from the Gathering event and said it is donations such as this that help the hospice team assist patients and families during a very difficult time.

“We have ongoing operating costs and we rely on donations to help fund them,” Maroney said. “We need $100,000 per month over and above our government funding, and this donation is a huge help for us to offer our services to families at no cost.”