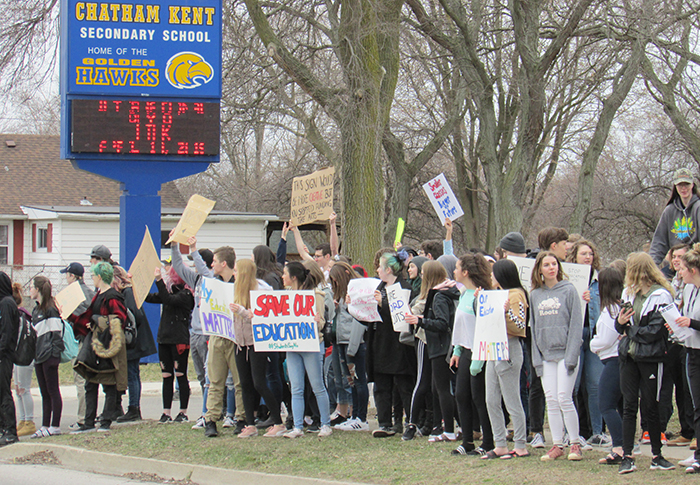 The student walk-out recently at Chatham high schools to protest provincial government changes to education has brought out the cynics in force, and it is somewhat insulting to the teens involved.

Was every student that participated in the walk-out well informed, knowing all the issues and exactly what they were protesting? I think we can safely say no.

Hearing what the walk-out organizer at Chatham Kent Secondary School had to say about the reasons for the walk out, though, shows teens have the brains and political awareness to have a voice in their own future. They are allowed to be upset over changes that affect them directly.

To say they only walked out because teachers riled them up is incredibly cynical and doesn’t give them enough credit. And to say they only care about the cell phone ban is wrong as well.

Spokesperson Emma Kathleen was more aware of the issues and how she felt they affected her and fellow students than most adults we know. She spoke well and factually about the issues of mandatory e-learning and how that method of self-learning was not suitable for every student, and the effects of larger class sizes on students who may struggle and need extra help.

She knew the government was trying to cut costs to reduce the debt, but had the opinion that cutting education funding was not the place to do it.

Say what you want about student motives, but don’t assume they are mouthpieces for the teachers. Give them credit for forming thoughts and ideas of their own on topics of which they care.

Adults are quick to blame teens for a myriad of social problems and label them as disrespectful hoodlums. Sure, some of them are, but the majority are leaders, volunteers and decent kids who have incredible things to say if we stop and take the time to listen.

Do teens complain? Absolutely. But if you have ever been on rants and raves sites on social media, you will realize adults do more than their fair share of uninformed complaining.

Let students have a voice. Take the time to listen with an open mind. You may be surprised by what you learn.