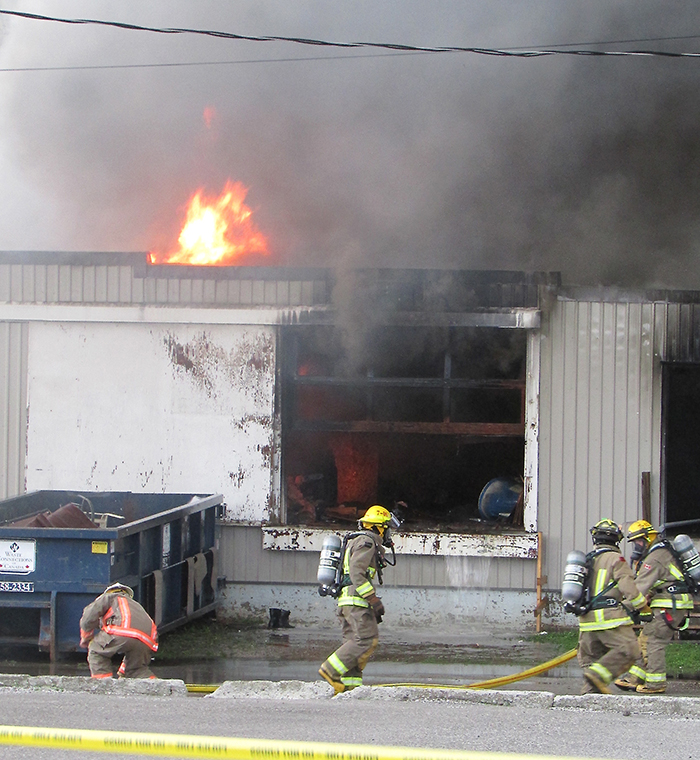 There are few things as chilling as receiving a text from a friend asking if your workplace is on fire.

That’s what happened Saturday afternoon. Friend Tricia sent me a text that a large smoke plume was coming from the vicinity of our workplace on Dover Street.

Naturally, I booked it down here to see what was up.

Fortunately for us, it wasn’t our building. Unfortunately for Church’s Army Outdoor and Military Surplus, as well as a hot tub shop that had just moved product into the building on Thames Street, they went up in flames.

I arrived to see smoke pouring out of 61 Thames St., right around the corner from our office.

I slipped into the office, switching from potentially panicking business owner to journalist, and grabbed my camera.

It was a nasty fire, and fortunately no one was injured inside the building. Firefighters quickly had two ladder trucks pouring water onto the roof and into the building, accompanied by several hoses at ground level. With all the fibreglass from the hot tubs and various spa chemicals involved in the blaze, extinguishing the fire was no simple matter.

And then there was the toxic smoke emanating from the building. It was dark, thick, and dangerous.

Yet dozens of people stood around to watch the fire, while many others tried to drive down nearby streets for as close a look as possible.

Police officers repeatedly asked people to step back, as the wind caused the smoke to swirl about. Neighbours were asked to remain in their homes and close up all windows so they wouldn’t breathe in the smoke. Several homes were evacuated for a short time as well.

I was stunned to see the number of young children near the fire. Given the toxicity of the smoke, this was no place for kids, yet it was apparent that not all were remotely under parental supervision.

Yes, I remained close to the fire for some time, snapping pictures. Before the police pushed everyone back, as I rounded the back of our building, at least 30 yards from building, I could feel the heat from the flames licking through the top of the store. Remember, heat rises, and yet we could still feel it.

By the time I returned to retrieve my truck, which I had already moved back once, I had to go through police tape to exit the area.

Another journalist with young children commented on the scene that one of her kids wants to be a firefighter when he grows up, but fires such as Saturday’s has her hoping he changes his mind in the years to come. A career battling blazes with all kinds of unknown chemicals burning has ravaged the lungs of more than a few firefighters. 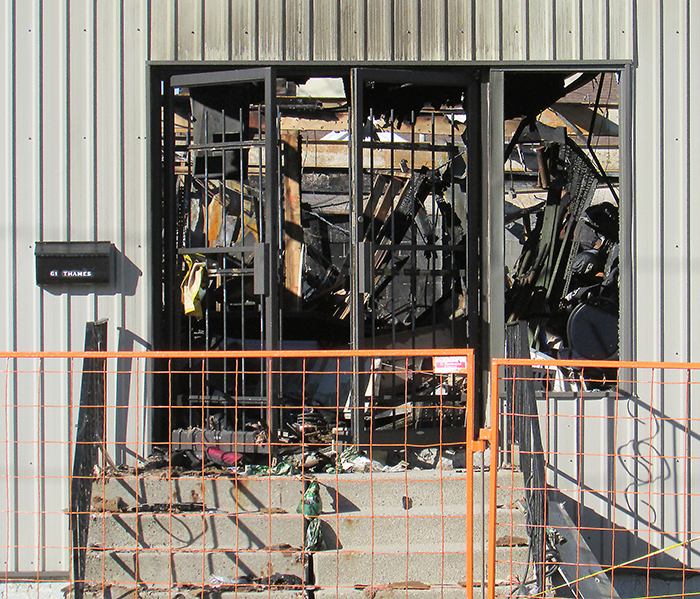 Our cat recently received more letters from his friend, “Dotty,” the cat. Dotty sent additional homemade catnip-filled mouse toys and asked Finn if he was feeling better after being neutered.

It’s classic stuff. Hats off to the person who is sending the letters.

“I’ve been very busy watching birds and squirrels from the front window. A bird with a blue suit and a blue hat comes for lunch every day. That bird is very mouthy; the other birds don’t like it very well. It eats all the tibbies from the feeder.”

Not sure what “tibbies” are, but I’m pretty sure “Dotty” would like to catch that annoying blue-suited bird.

Finn is indeed fully recovered, and not at all any more relaxed after the surgery. He eats like a small horse right now too. And then burns it all off sprinting around the house.