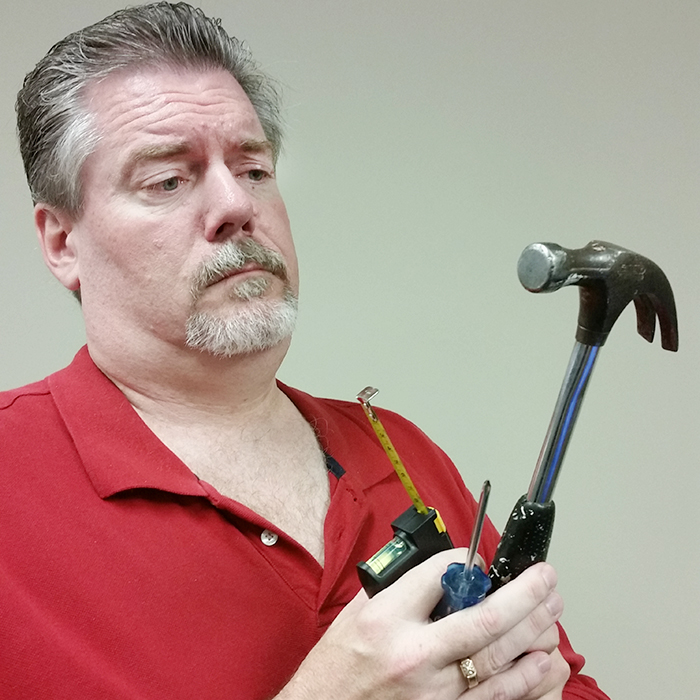 I’m the first to admit I know very little about gasoline engines. Something goes wrong under the hood of one of our vehicles, and I am of no use.

But I like to think of myself as knowing at least a little bit about how to tinker, as in how to see a problem and fix it on many a basic machine or item.

OK, so that’s not always the case either.

Recently, while cutting our back grass, I noticed the mower wasn’t giving me as consistent a cut as it normally does. Then I spotted a piece of black metal in the backyard lying in the fresh-cut grass. It was one of the height adjustment levers from the mower.

It turns out it was from the rear left wheel. The thing must have just come loose, I pondered as I picked it up and continued to cut the lawn, and now noticing that the wheel was flopping around a bit. It also left the mower on an odd angle, causing the inconsistent cut.

When I went to put it back on, I realized the lever had actually broken off. How the heck does that happen? I don’t even adjust the mower anymore.

Regardless, a trip to the supply store and a quick explanation to the dude at the desk, along with the make and model of my mower, resulted in him handing me a new lever.

But it didn’t end in a stubby Y like the one that came off the mower. I mentioned that to him. I got a bit of a long look, and before he patiently explained, I realized the reason mine ended in a Y and the new one just had a hole at that spot was because – wait for it – mine had broken off.

As I said, I’d like to think I’m a good tinkerer. Perhaps if I’d actually pulled off the wheel in the first place…

At this time of the year, starlings tend to flock together in the thousands, and sometimes millions to form mega flocks, which are known as murmurations.

In Europe, there are areas where these massive bird formations draw onlookers every evening. Pretty awesome sight.

Well, you can see smaller versions of these murmurations locally too. For the past couple of weeks, while driving along Merlin Road just south of Fletcher, I’ve had the pleasure of seeing the starlings perform their aerial ballet firsthand, and in the middle of the day.

Most recently, thousands of these birds were straddling the road and I had to slow right down to allow the starlings to get out of the way. They quickly formed up and became one large, undulating mass, flowing west and then east across the road before settling behind me after I’d passed.

To see a murmuration on a grand scale, check out this video: https://youtu.be/eakKfY5aHmY

October is a great month to be a couch potato. Well, you have to pick your spots, really, as it’s also yardwork season too.

I’m a huge Chicago Cubs fan and they’re embroiled in the National League Championship Series. But I also cheer for the Toronto Blue Jays, as do my wife and daughter, and the Jays are in the ALCS as I type this (they didn’t fare too well to start their series against Cleveland).

And I’m an Oakland Raiders fan, as most of you also know. They’re actually off to a decent start this year in football, after more than a decade of stinking up the joint.

I apologize to my wife and daughter for possibly waking them up Saturday night. The Cubs, having blown a 3-1 lead, rallied to win the opener 8-4, thanks in no small part to a pinch-hit grand slam in the late innings. Yes, I cheered loudly in the basement at that moment. How can you not?

It’s been 108 years since the Cubs won the World Series. They bowed out in the NLCS last year, but this year’s club is even better.

But there are no cakewalks. The competition is tight, and the games are exciting to watch.

For some reason, as I type this, the grass still needs cutting and the pond shut down for the season. Oh, well, at least most of the leaves are still on the trees.