The Dover group Water Wells First, with help from the Ontario Ground Water Association, has filed a notice of appeal of the agreement between the North Kent Wind 1 project and the Ministry of Environment and Climate Change to build up to 50 wind turbines.

In a recent press conference on the property of Dover farmer Laurier Cartier, Water Wells First led by Kevin Jakubec, said until the ministry investigates the sediment problem with up to 20 wells in the Dover Twp. area they believe is caused by vibration from the wind turbines, they will continue to object to the project.

Holding a brown and clogged water filter from the filtration system he installed in his kitchen, Cartier said the sediment problem started the day they started pile driving the footings for the turbines. Jakubec said Cartier is just one of many farmers who put in filtration systems.

“He put in a filtration system to try and deal with it on his own, like a lot of farmers have tried to; it doesn’t work,” Jakubec said. “He has to change the filter on his water filtration system every two to three days because it plugs up. We have been trying to bring the Ministry of the Environment into this for the past eight months. As of yet, there have been no meaningful investigations.”

Jakubec said the problem with sediment in the ground water is unique to Dover residents because the soil formations are sensitive to vibration impact. What his groups wants is for the wind turbine company to do a thorough ground vibration study by an unbiased third party before any footings are driven into the ground.

Craig Stainton, executive director of the Ontario Ground Water Association, said the group is not anti-wind turbine, but rather it is against any project that affects ground water and the source of drinking water for landowners. He said the main point is before the turbines were built, people had good well water and now they don’t. 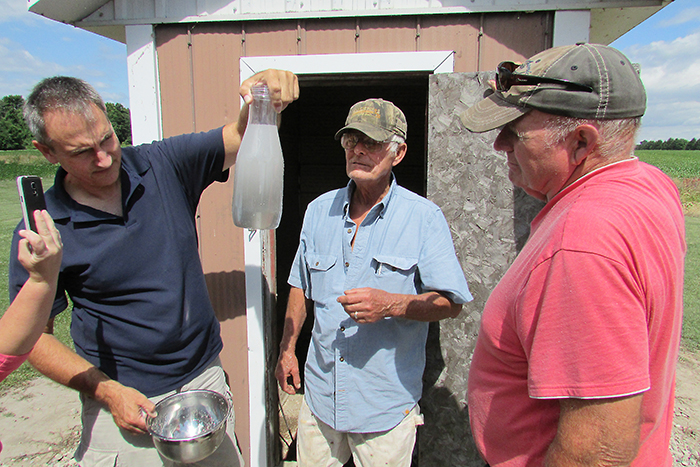 “Laurier’s concerns haven’t been addressed yet. He is spending money each and every time he changes that filter,” Stainton said. “Over the course of 20 years, that’s going to cost him a lot of money.”

Jakubec said he has been doing plenty of research and been in contact with the world’s leading authorities on the issue of vibration impact on the ground. He believes the whole problem can be corrected if the wind turbine companies retrofitted existing turbines with vibration suppression systems and installed them in any new turbines to be built in areas with vibration sensitivities such as Dover Twp.

“I did a literature review of scientific studies that show wind turbines sending vibration into the ground is a phenomenon called seismic coupling. It doesn’t happen very often.”

The activist went on to explain that a top expert in Scotland was able to fix the problem in wind farms in Europe by adjusting the frequency that the turbine generates so it was different than the natural frequency of the sediment. That stopped the shaking that caused the sediment to keep moving in ground water aquifers.

Cartier noted when he leans on his windowsills in his home, he can feel the vibration. His toilet, bathtub and pump house for the well all are dirty and blackened due to the sediment coming out of his taps.

In the Renewable Energy Approval (REA) agreement between North Kent Wind 1 and the MOECC, approved June 29, there is a provision for homeowners with adverse effects on their wells to be supplied with bottled water, but Jakubec said that remedy won’t work for farmers with livestock needing potable water to drink.

The agreement also calls for a vibration study by a licensed engineer or geoscientist, but Stainton wants to ensure that the people affected have a say in who conducts the study and the entire process.

“The MOE wrote into the North Kent REA that they will do a vibration study, but the REA does not give the local citizens any say into who does the study. Who does the MOE and North Kent Wind answer to?” Stainton questioned.

Chatham-Kent councilor and Dover representative Leon Leclair said he has been in contact with Cartier about the issue of his well. He said he doesn’t know if the current problem can be solved, but for new wind turbines, there needs to be testing done by a third party, and issues like water pressure and turbidity addressed.

“This is a suggestion and only a suggestion because I am just one opinion, but I believe the wind turbine company should supply plastic water tanks until we get this problem solved in the short term,” Leclair said. “If it can’t be fixed then, do we look at bringing in city water? I have a couple of cattlemen in my ward and you can’t feed cattle bottled water. It’s just not feasible.”

Leclair said while the group was turned down for a delegation before council recently, they will certainly be welcome to address the issue when it comes before council.

With the notice of appeal filed, a hearing is now required before the Environmental Review Tribunal before the wind project can proceed, according to the REA.