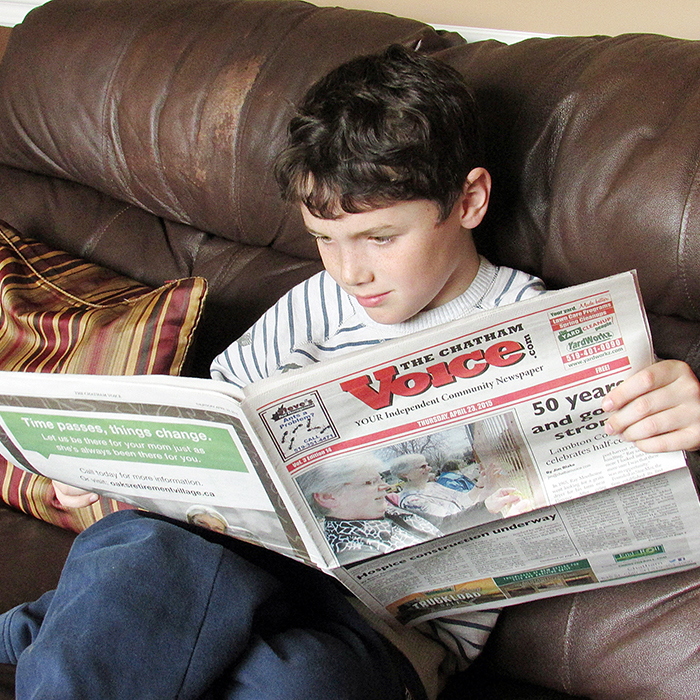 Is print journalism on the way out? I don’t think so; not entirely.

A positive comment this week on Twitter for The Chatham Voice from a stranger in the media business got us thinking on the whole issue, and of those who are sure newspapers are on the way out.

A web writer for CTV Kitchener, Ryan Flanagan, responded to a comment on a Twitter news blog by National Post contributor Ashley Csanady about the demise of print. Flanagan used The Chatham Voice as an example of a new, locally owned, hyperlocal news outlet that was thriving in a Sun Media-dominated area, saying people still respond to local.

Flanagan went on to say he thinks we will see a “renaissance of hyperlocal, locally owned news outlets and owners OK with tiny profits.”

I couldn’t agree more. When we started two years ago, the dream was to get out from under the corporate mandate of profits over people, and the negative idea that if it bleeds, it leads. Our goal is to report on our community – the people, the issues, the successes and, sometimes, the failures. We talk about our hometown heroes, our neighbours, our politics, the things we get right, and the things we do wrong.

And we aren’t alone. Independent news outlets such as the papers in Blenheim, Ridgetown, Wheatley and Thamesville existed long before we came along. CKXS Radio in Wallaceburg is another independent relative newcomer to the scene. All have a passion for bringing people the local news and information they need.

People want a respite from the unrelenting tsunami of breaking world news guaranteed to make you want to pull the covers over your head and not come out. Nothing is more relaxing than sitting down with a coffee or tea and the local newspaper to see what is happening with the people you live with every day. It may bring a smile to your face, rile you up or give you your social calendar for the next month.

That is what a community newspaper is designed to do. If you want to know what is happening nationally or around the world, you’ll watch the evening news, go online or subscribe to a national newspaper.

Corporate greed, for some, has reached epic proportions with shareholders demanding more and more profits, while others refuse to adapt or invest in their news gathering, and the decline of some media outlets are a perfect example. There are very good writers and photographers that have worked for Sun Media over the years who have been forced to walk away from a job and business they love. There are still people working there because they love what they do, just not the way they are forced to do it.

Small locally owned business owners do what they do, yes, to make a living, but mainly because they love what they do and they want to share that with their community, without a corporate albatross hanging around their neck.

Even larger corporations such as Union Gas, TekSavvy and Scribendi that have their roots locally still understand commitment to the community and demonstrate it every day.

We are here, we are independent and we’re not going anywhere. And to our ever-growing group of loyal readers who take the time to tell us why they love us – thank you! You are the reason we do what we do.