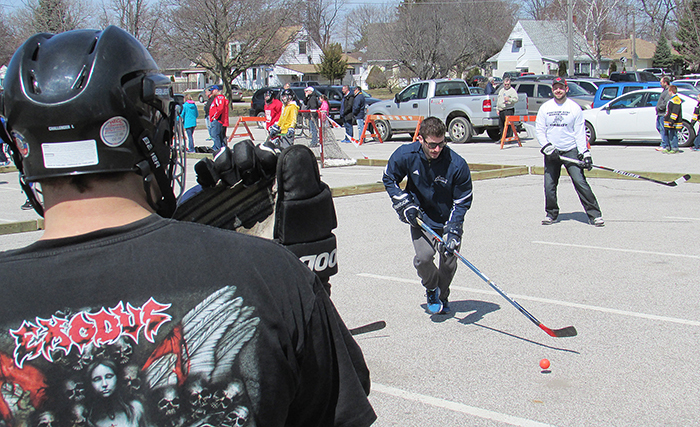 So, we didn’t get the title of Kraft Hockeyville for 2015. Big deal.

We actually got so much more.

Saturday’s Bash at the Barn was the final piece in a great showing of community spirit as Chatham went up against North Saanich, B.C. Yes, the suburb of Victoria ultimately clobbered us in the vote totals, but you have to realize most of Vancouver Island was likely voting for them, while we were likely on an island of sorts here. I doubt folks in Windsor, Sarnia or London got behind us en masse to support our quest.

So, we lost out on the NHL preseason game. That is too bad. But we did get the $100,000 in arena upgrades for Memorial Centre.

And we also got to see the power of grassroots mobilization.

Sure, at Saturday’s party at Memorial Arena, you saw police, fire and other municipal types on hand, but make no mistake, 99% of the heavy lifting in our quest to be crowned Hockeyville came from citizens, not municipal officials or employees. The municipality simply jumped on the bandwagon.

Chad Peterson deserves a huge tip of the cap for leading the charge. The Maroons’ superfan really got things going.

And the Hockeyville committee powered up into overdrive to support the effort.

We’re very good at online voting, but this was much more than that. A stop at Saturday’s bash was a big indicator. Memorial Arena was a very busy spot that day and evening. Kids and adults enjoyed the three-on-three road hockey tournament, with no one taking matters too seriously.

Pony rides, face painting, a bouncy castle and many more activities had the kids loving the day.

We received national television attention during the Hockey Night in Canada pregame show.

We had a booze-free, family friendly party all day long, with people from all walks of life coming together to enjoy the moment.

Easter weekend is a time where many Christians reflect on the sacrifice Jesus Christ made for humanity. Some go to church to do so, while others keep their own council with God, and still more just look at the weekend as extra time off from work.

Regardless, the Easter weekend often becomes a time for family. With busy lives, it can be difficult for everyone to get together.

For us, we did the family gatherings in shifts this weekend, connecting with Mary’s brother and his family on Good Friday, and her sister and her family on Sunday.

Naturally, family get-togethers often involve food, as did both on the weekend. Mary’s brother Tom and his wife Delynne brought over most of the food Friday, including salmon and cod, while we cooked it. We added some shrimp, more salmon, and potatoes and asparagus.

Oh, and the Big Green Egg for cooking, of course.

I had to stack the cod over the salmon on an upper rack, as we had so much food, but everything worked out.

And that was after we did some amazing potatoes with a garlic-blue cheese seasoning.

As for the fish, we baked it on the barbecue, with thinly sliced lemon, and seasoning sprinkled liberally on top.

The rain held off just long enough for me to finish cooking outside that night.

Some family gatherings can seem to last forever. You can hear the clock ticking every slow second in the lingering silence. That’s not the case with this crew. Even the kids hung out with us, rather than escape to play video games (well, one did have his tablet running most of the time, and our daughter had her phone in her hand) and took part in conversation.

The same was true Sunday, when we went over to Jane’s. The kids did an Easter egg hunt while the pork tenderloin cooked away on her barbecue.

Another delicious meal and another evening of good company and more laughter.