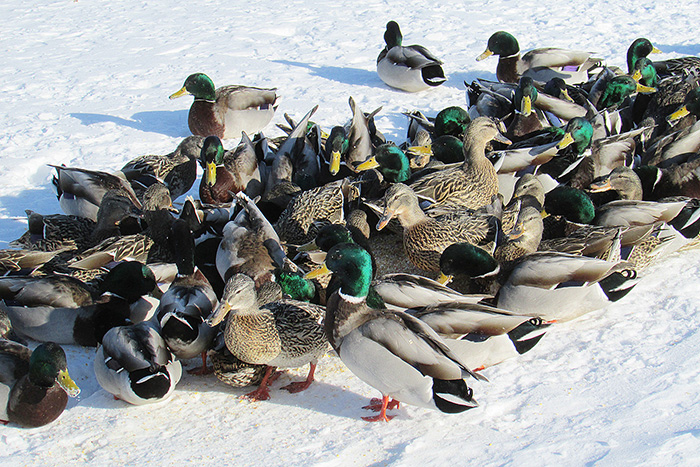 She asked, and concerned citizens responded.

Carmen McCauley pleaded for assistance to feed a brace of ducks on Mud Creek in Chatham, as reported in the March 5 Chatham Voice. Since that article appeared, McCauley said the aid has been pouring in.

One day after the story appeared, she had two men hauling the 55-lb. bags of cracked corn for her. She said the men would each be bringing a bag a week. McCauley has fed the ducks, which were starving, a bag every other day in recent weeks.

That same day, she found a cheque in her mailbox that would pay for five bags of corn. That evening, two other people brought corn to her.

In the following days, volunteers continued to come forth, as well as people pledging money or bags of corn.

“I have the rest of March booked with lovely volunteers. Everyone has their corn now for the next few weeks. I can breathe a sigh of relief,” she said. “Everyone has been fantastic. So many people said such nice things to me for stepping up and organizing this. Many compliments on (The Chatham Voice) as well.”

Along with support, McCauley has also received additional requests for help. She said two women told her of two groups of ducks on the Thames River that hang out around small patches of open water near drainage pipes. The ladies donated money to McCauley and asked if she could feed these ducks as well.

“I went to both places this morning,” she said Sunday. “There were about 100 too weak to move much. Snowmobilers ran right through the middle of them and none moved. I rode the bags of corn down the incline to the river – it was fun – and spread the corn broadly.”

McCauley has been purchasing her cracked corn from TSC on St. Clair Street. She said she alerted the store to the starving ducks, and warned staff it would be getting busy.

“I can’t keep my cracked corn in stock. I talked to her on the weekend. She had a ridiculous amount of response to it and she let people know we had the cracked corn. It would just start flying off the shelves. We’d get it restocked and it would run out again,” he said. “Judging by the sales we had here, I imagine she’s got two or three skids (of cracked corn) in her garage.”

McCauley now has a support team of nine volunteers to haul the feed to the ducks. Each day for the rest of the month, the ducks will get a bag of feed, she said. And if there isn’t enough grass showing in April, she said the volunteer effort would continue into that month.

The influx of support has revealed a problem, however. McCauley said she observed well-meaning families throwing corn and bread at the ducks on the weekend, while their children and dogs ran free. McCauley said the ducks were surrounded by food, but were too scared to eat. The crows, on the other hand, had no such reservations.

“The ducks were too terrified to feed and the crows were having a field day. It was chaos,” she said.