Carmen McCauley is a dog lover, but lately, it’s a brace of ducks that have captured her attention.

And she hopes others will take notice as well.

For the past several weeks, McCauley has taken bags of feed to the ducks that are trying to survive this very cold winter huddled together on a small patch of open water on Mud Creek, just west of Wedgewood Avenue in Chatham.

Every second day, McCauley purchases a 55-lb. bag of cracked corn, drives to the park on Tweedsmuir Avenue, hauls the heavy bag over a steep snow bank and then slides it a down a hill and about 75 yards into the park. It used to be further, as the open water where the ducks cluster is in the north end of the park, but now the ducks take flight as soon as they see McCauley coming.

The animal lover, who volunteers at Maynard Avian Rehab Centre in Chatham, said the ducks are extremely malnourished.

Maynard’s Joanne Siddall agrees. People have been bringing ducks to her over the course of the winter and a number are in rough shape.

“They come in starving. Some have been seen in one place for four days without food,” she said. 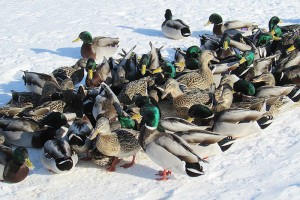 McCauley said it’s surprising how light some of these birds have become.

“The first one taken into Joanne felt as light as a newspaper,” she said.

Siddall said when the birds are in that condition, it’s a slow process to get them healthy again.

“You can’t even start feeding them solid food at that point. You have to go slowly and get them rehydrated first,” she said.

McCauley hopes to prevent other ducks along Mud Creek from winding up in Siddall’s care, or worse, dead.

Each bag sets McCauley back about $12, she said. She pours the seed out in a thick line, and the ducks converge for a feast. That large bag of corn, however, is gone in about 10 minutes.

Siddall said there are other clusters of ducks around Chatham that are facing similar concerns. The birds don’t migrate and the extreme cold of the past couple of winters have greatly reduced their habitat.

Having access to the open water isn’t an easy task for the waterfowl when the temperatures dip so low at night as they did for much of February.

“They (the ducks) desperately paddle around with each other to keep the water open,” Siddall said.

Some of the ducks are domesticated, while others are migrating birds that just opted to stay here. Nearly three decades of winters where the Great Lakes don’t freeze over have led to these ducks overwintering in Chatham-Kent, Siddall and McCauley said. But the past two winters have been so cold that those same large bodies of water have all but frozen over, leaving these birds with few options.

Enter McCauley, who plans to continue to feed the birds.

“If I had the corn to feed them every day, I would,” she said. “I am going to keep this up until I see a little green on the ground.”

Siddall applauds McCauley for her effort.

“She’s an angel. I just love the fact she’s doing it,” she said. “With out people like Carmen, these ducks would starve to death.”

The challenge is to have a few more Carmen McCauleys involved

“If people can put food down for the ducks, it would be appreciated,” Siddall said. “A 55-lb. bag of cracked corn is not that expensive. It would feed a lot of birds.”

McCauley would appreciate the assistance.

“I’m just hoping other people will feed the critters,” she said. “All these people live along this creek and they like to see the ducks. Please feed them.”

If anyone wants to help, they can contact McCauley by e-mail at carmenstuff@hotmail.com to co-ordinate the feeding. 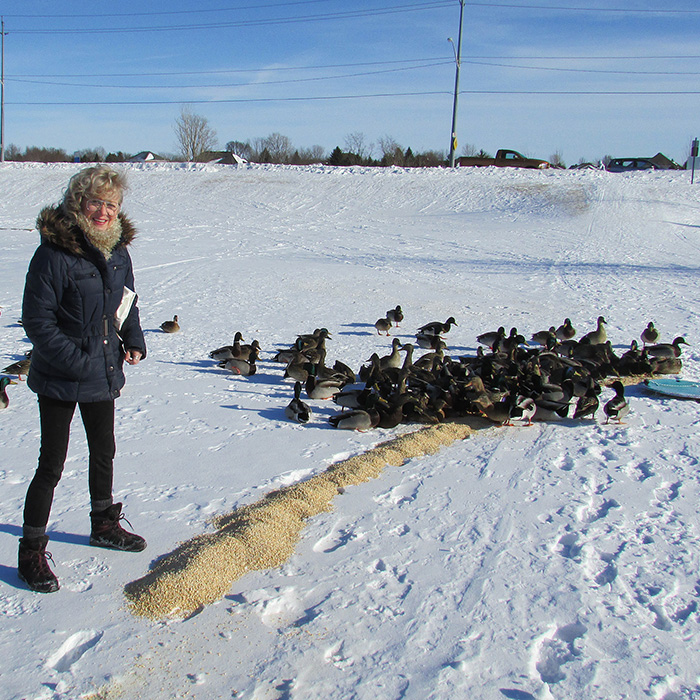