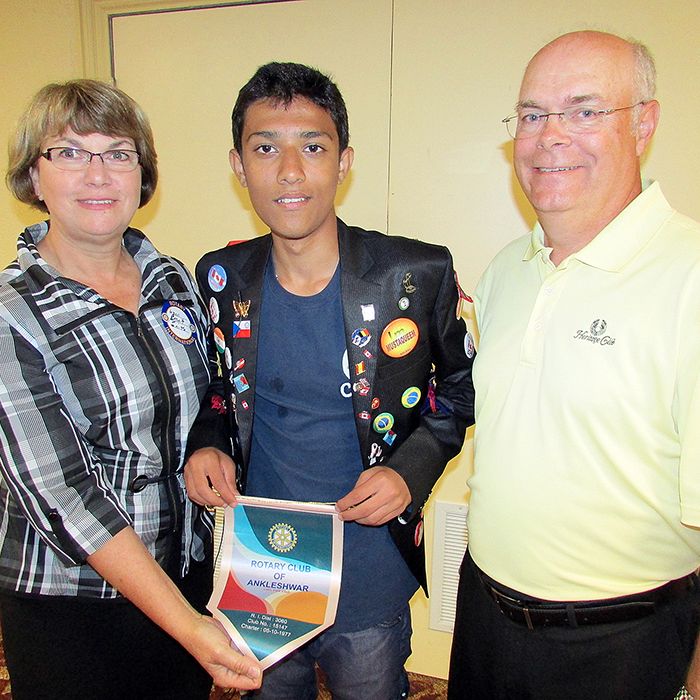 Rotary Club of Chatham host parents Brett and Lynn Smith are proud of Rotary International exchange student Musa Shaikh from India, who gave a speech on his experience in Canada at a Rotary luncheon June 11.

At 16, leaving home to travel thousands of miles away to a foreign country is scary.

For Grade 10 Rotary International exchange student Musa Shaikh from India, the experience has been a great and definitely cold one.

Sponsored by the Rotary Club of Chatham, Musa was guest speaker at a recent Rotary luncheon, and talked about his travels since arriving here in December, 2013.

“It has been great fun. I have enjoyed Canada very much,” he said during his presentation. “When I came here, it was -5C – the coldest day of my life!”

An engaging, well-spoken young man, Musa also thanked his host family, Brett and Lynn Smith of Chatham, for being his Canadian family for the past seven months.

The town is also the birthplace of Mahatma Ghandi, and has a rich history of festivals such as the Kite Festival where Musa said millions of kites take to the sky, and dance festivals featuring traditional folk dances Dandiya Raas and Garba Raas.

Musa was introduced to Rotary at the age of six through his grandfather, who was president of his local at the time. Spending time with him and seeing what he was involved in piqued Musa’s interest in Rotary and the exchange program.

One of 100 candidates for the exchange, Musa is very grateful he was chosen and was allowed to come to Canada.

When asked by a Rotarian what countries he had to choose from, Musa said they offered him an exchange in the U.S.

“Canada was my choice – first and last,” Musa said.

Some of the highlights of his trip here, he said, were spending time with other Rotary exchange students in the area, and heading to a Detroit Tigers game with his Rotary councillor Don (Sparky) Leonard, who presented him with a Tigers jersey with his own name and number 11 on the back.

Musa will be starting Grade 11 when he heads back to India in July, but said he hopes to come back to Canada after high school and become a neurosurgeon, a fact that lit up the face of Rotarian and CKHA physician recruiter Fannie Vavoulis.

For host parents, Brett and Lynn Smith, being able to bring youth from other countries into their home and incorporate them into their family has been a rewarding experience. After 29 years of involvement in the Scouts, Brett said when he became a Rotarian, it was a natural fit to work with the youth in the exchange program.

“Sometimes it can be a difficult transition, adopting our culture to theirs and theirs to ours,” Brett said. “We treat them like our own children and you get to see your community through a separate pair of eyes.”

“I encourage people to consider it (hosting). You learn a lot about yourself and none of the changes we have made were that hard,” Lynn explained. “People who have teenagers would really enjoy this experience, because the teens really want to be involved with the family and other kids. Musa has a younger brother and sister the same age as my grandkids and they love climbing and rolling on him.”