At nearly 84 years of age, James Patrick Kevany stands as straight and true as one of the hydro towers he helped string for 36 years.

He’s been married to the same woman for nearly 60 years, has lived in the same house for almost 50, he and his wife raised 10 children and now have 18 grand children and six great grandchildren.

There was a time, however, when Pat, as he’s been called since his childhood in Ireland, left his wife Rose and their family for a love affair.  True to his nature, he told her he was leaving and that he wouldn’t be home for a month.

“I told him to fill his boots,” and be on his way, she said with a laugh.

Pat had announced to his wife in the spring of 1978 that he intended to take a journey across Canada as a way of celebrating his new Canadian citizenship.

“I knew she’d be fine with it,” he chuckled at the recollection. “I’m Irish and I’m going to do it anyway.” 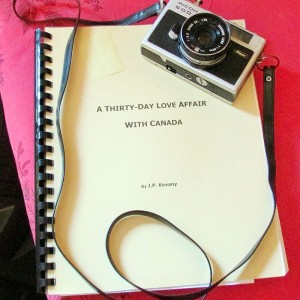 Pat said he didn’t have much money to spend on the trip but he’s never believed money was the measure of happiness.

“We always paid our bills, we were never behind and we had no debt. I was leaving in May so the grass needed to be cut but there were still nine children at home.”

The result of the trip was some unforgettable memories and something more tangible as well. He created and still proudly displays an 840-page scrapbook containing some of the 15,000 photos he took with his Ricoh 500 camera, and also a 200-plus-page journal he wrote on the trip, a book he eventually entitled A Thirty Day Love Affair With Canada.

“I went to a book binding fellow who told me there was no way to get all of the pages in one scrap book. He wanted me to put it in different volumes but I said Canada is one country and it has to be in one volume so I got four steel bolts from Hydro to hold it together and it works just fine.”

The pages of the scrapbook are colour coded to correspond to the trip, blue at the front and back to represent the oceans and green, yellow and red to represent Canada’s regions.

The idea for the trip came from a Greyhound Bus Line advertisement, which offered a $75 bus fare to anywhere in Canada.

“The only catch was that you could only go one way, east or west,” Pat said. “I bought my cross country ticket in Chatham and flew to St. John’s Newfoundland, aiming to head west across Canada.”

Once on the road, he discovered he had to be creative or the $700 he had in cash wouldn’t be enough.

“I looked for whatever cheap lodgings and meals I could find,” he said. “If you keep your eyes and ears open, it doesn’t take too much to find a bargain.”

Still, there were times, when it was touch and go.

“A couple of times the local YWCA let me stay there, although they put a big sign on the door that there was a MAN in the room,” he laughed. “One time in the Yukon I put a couple of sheets of iron together as a covering, another time I cleared out some room and slept in the back of an RCMP station. Another place I named the insulation hotel because I slept on bats of insulation.”

One frightening situation happened when Pat slept on (not in) his tent under a tree in Jasper, Alta.

“I woke up to the sounds of an animal nearby. I didn’t move because I thought it might be a bear, but then I heard it eating grass and I knew bears don’t usually eat grass, so I looked up and it was a huge elk.”

Even though there were no Greyhound buses in parts of eastern Canada at that time, other companies honoured the ticket. “They must have had some kind of arrangement,” he said.

As he went farther west, his Chatham-booked ticket drew some glances.

“I had a couple of questioning looks but after a while everyone knew what was going on and they were expecting me,” he said. “I had one fellow tell me that the order went out to honour the ticket wherever I went but they’d never issue another one. I have nothing but good to say about Greyhound, they treated me wonderfully.”

Pat emigrated from Connaught, County Mayo, in 1951, on the cruise ship Georgic, a one-time luxury vessel that had been sunk, refurbished and outfitted as a troop carrier during the Second World War.

It was a six-day journey across the Atlantic, which wasn’t without its memories.

“We travelled tourist and at times it was cramped. I was on the deck, shifted a little bit and the person behind me (a woman) gave me a withering glance, thinking I was trying something underhanded. She said something I won’t repeat and I looked over at her and told her “you’re not so good looking yourself.”

He found his way to London, Ont. where he married Rose and started a family, eventually moving to Ridgetown and on to Chatham.

Among his memories of his celebratory cross-Canada trip were things he said most people wouldn’t know unless they retraced his steps.

“Did you know that from Winnipeg westward, a lot of government buildings have domes but hardly any from Ontario eastward do?  Another thing is that churches in the west don’t have the spires and steeples they do here.”

Pat said he had “very little trouble” on his journey.

“People were very nice to me. I had police officers stop traffic in some cities so I could take pictures of some of the larger buildings. Can you imagine that happening today?”

He encountered no language difficulties in Quebec despite knowing no French.

“I learned to say ‘poulet, s’il vous plaît,’ but I like chicken so it was all right.”

Including numerous side trips (“when I was in Winnipeg I detoured to Churchill for a few days, and I also went to the Yukon”) Pat estimated he logged 13,000 miles, each portion of the trip meticulously logged as was the cost, – $1,300.

He concludes his book with the following:

“So the trip cost me 10¢ per mile, and I wish I had that much fun out of every dime I’ve spent and I’d like to get that much pleasure out of every 10¢ I spend in the future.” 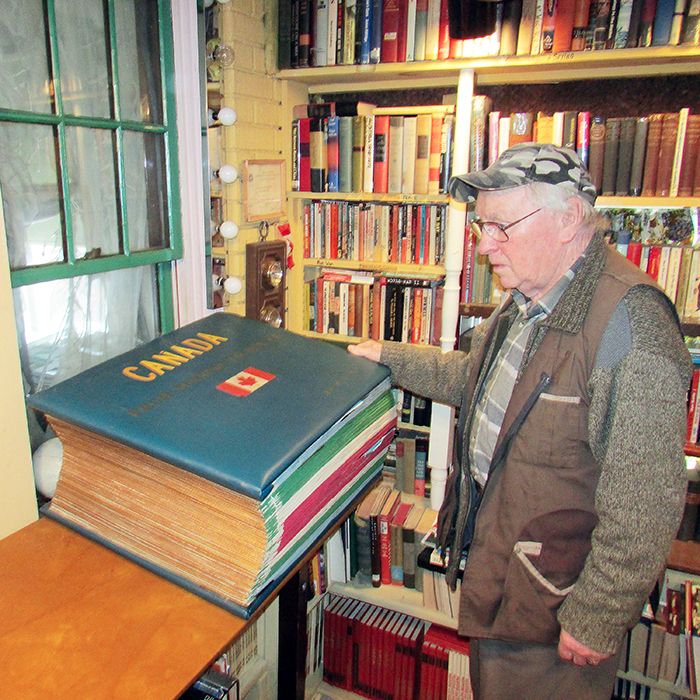