DCC gets greener with charger station 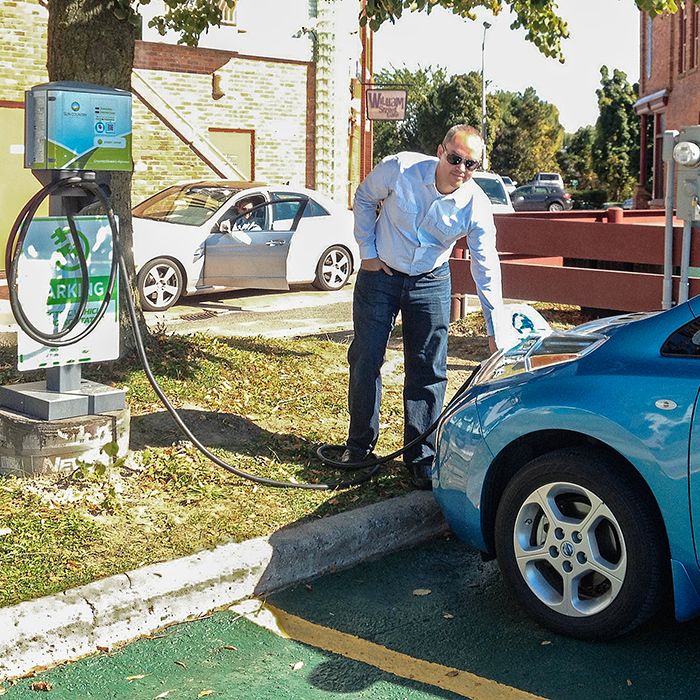 Union Gas employee Sean Hart seized the opportunity to top up his zero emission Nissan Leaf at the Downtown Chatham Centre. The mall has partnered with Entegrus to offer the electric vehicle recharging spot in its parking lot. And the juice is free.

The Downtown Chatham Centre and Entegrus have partnered with Sun Country Highway to make Chatham’s future a little greener.

A new charger station for hybrid and electric vehicles (EV) is now located on the northeast corner of the Downtown Chatham Centre parking lot behind the Retro Suites Hotel.

EV drivers now have the opportunity to plug in their cars for free while they enjoy Downtown Chatham.

“We are thrilled to be part of the inaugural launch of the first EV charging station in Chatham-Kent” stated Dan Charron, President of Entegrus Powerlines Inc. “The development of renewable energy in our area to support our community’s green initiatives, as well as overall system improvements we are making to ensure our infrastructure is ready for the smart grid, continues to be top of mind. The installation of the charging station is a great milestone to celebrate, connecting Chatham-Kent with other cities that have begun to adopt this technology.”

With hybrids and electric vehicles increasing in popularity, this gives Chatham a new way to cater to a growing market. The average EV can travel 65 kilometres between charges.

“The Downtown Chatham Centre is already receiving calls from EV owners asking if the station was active, “ said Jaclyn Gillier, the DCC’s marketing director. “We even had an event planner hoping to make DCC a stop on their electric vehicle rally race across North America. They are finding out about us online and through smartphone applications such as Plugshare.”

Entegrus purchased and had the evCharger system installed by Sun Country Highway, and is currently covering the cost of electricity used to charge the vehicles.

About the Author: Anita Markert

Anita was born and raised in Chatham. For most of her adult life, she lived in Toronto, establishing her own business as an executive recruiter for multi-national advertising agencies until joining Fox Racing Canada in 2002 as their advertising manager. In the fall of 2011, Anita acted upon her desire to return to home turf and pursue her passion for photography. In addition to sales of her collection of artography, Anita's recent commercial projects include website photography as well as the photography and production of 'photos-in-motion' video tours. She also collaborated on the photography/production of a newly released hard cover coffee table book. As a freelance contributor to the Chatham Voice, Anita now adds photojournalist to her portfolio.

3 Responses to DCC gets greener with charger station

« Got cash? The 1% does in the U.S. Municipality ends extra curbside bag limits during fall and spring »