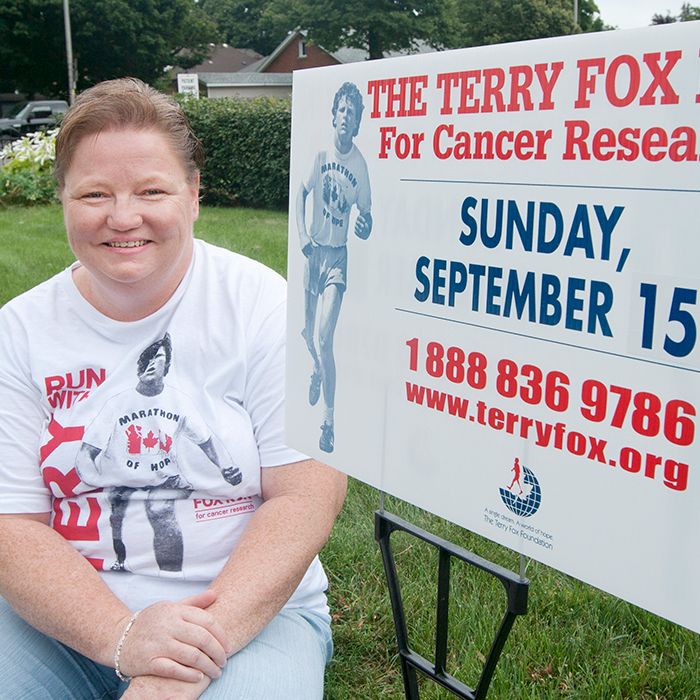 Just over a month ago, Barbara Hutchins’ world was turned upside down when she felt a lump on her right breast.

Less than a month later, the 43 year-old wife is set to undergo a radical modified mastectomy for breast cancer, four days before she participates in the Chatham Terry Fox Run.

Using the words “whirlwind”’ and “roller coaster” to describe her experience so far, Hutchins is determined to beat the disease.

“I’m not bitter about getting cancer. I got it, but it doesn’t have me,” said Hutchins. “I’m going to take it and I’m going to use it because something good can come out of everything.

After the death of her uncle in January and close friend in June, from cancer, Hutchins says she owes it to them for having caught the lump.

Her personal battle staqrted with going through the stages of denial, anger and eventually acceptance.

There are a number of factors that she said pulls her through any moments of fear.

“My faith, my friends, my family and I’m stubborn,” said Hutchins with a laugh.

Through her experience, she hopes to share with others the message to take better care of themselves through her blog, “Let’s Talk: My Journey Breast Cancer,” at www.barbarahutchins.simplesite.com.

She takes readers through the unfolding of her diagnosis and is honest about her feelings, medical appointments and faith.

“If I can live and save a bunch more lives by having a big mouth and not being afraid to talk as well as lessen the fear and anxiety of family members, I’m good with that,” said Hutchins.

Hutchins admits she wasn’t the type of woman to do monthly checks for lumps, however in the past two and a half years, she has taken up yoga and running to get back into shape.

Instead of asking herself, “What was the point of exercising when I got cancer?” she instead said there was a reason behind it.

“The point is my body is strong enough now that I can fight it,” said Hutchins.

The Terry Fox Run on Sept. 15 is a chance for Hutchins to not only walk with her best friend Michelle, but take a physical stand against her cancer.

“My motto has been to embrace every moment, good or bad, because you have that moment, and to fight the disease – not the people who support you,” said Hutchins.

The community and Hutchins have event organizer Jessica Barton to thank after she and her husband Adam decided to take over the Chatham Terry Fox Run when she heard it was in danger of being cancelled for 2013.

Barton, like many others who will participate in the event, has had cancer affect her life. Her mother died from pancreatic cancer last October.

While it’s hard to predict just how many participants will show up this year, Barton says numbers are already three times last year’s figure.

With no minimum pledge or registration fee, anyone can join.

Participants are to meet at Kingston Park in Chatham, with registration starting at 8:30 a.m. on the day of the event and the run starting at 10 a.m.

Whether walking the one kilometre, taking part in the five and 10 kilometre runs or simply cheering on loved ones to the finish line, everyone can make a difference.

Those wishing to register or volunteer can visit terryfox.org or contact Jessica Barton for more information by phone at 519-355-0784 or e-mail at chathamterryfoxrun@gmail.com.