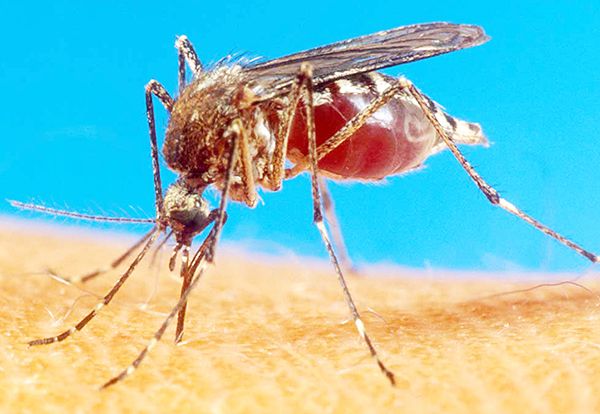 Just because mosquitoes rose from the ground like a zombie apocalypse following all the rain we’ve had doesn’t mean it will be a bad year for West Nile virus.

Michael Hatten, a public health inspector with Chatham-Kent Public Health Unit, said one doesn’t always lead to another, as heat is a key factor.

“Yes, more water means more mosquitoes,” he said. “But for the virus, particular mosquitoes have to pick it up from birds and then it has to amplify in the mosquito. It has to be hot for a period of time for that to happen.”

And then, of course, the infected mosquito has to bite a human to transfer the virus.

We’ve had the wet weather and that has resulted in the large mosquito population. But the temperatures have fluctuated a great deal as well, Hatten said.

In 2012, Chatham-Kent saw a large mosquito population, he said. The hot summer led to the development of West Nile virus in some of the mosquitoes health unit officials captured in three of the traps the unit maintains.

Those traps were located in Wallaceburg, Tilbury and Blenheim.

“We have the traps set up throughout Chatham-Kent. We started in mid-June and will monitor into September,” Hatten said.

Even if we do go through a heat wave, don’t expect to see municipal staff simply head out on the streets and drop larvicide in storm drains, just one place in which mosquitoes love to breed.

“It’s not automatic. We do a risk assessment first,” Hatten said. “If we start seeing positive mosquito pools, ones that test positive from our traps, we will look to drop the larvicide in nearby catch basins.”

Then again, the catch basins are only one breeding area for mosquitoes.

“We can do every catch basin in the municipality, but we don’t know what’s going on in people’s backyards,” Hatten said.

Not every mosquito is a potential West Nile carrier.

“The ones most likely to carry the virus – the bridge vector – will go and feed on a crow, for instance, and pick up some of the virus,” Hatten explained. “Then if you get hot weather, the virus will build up in the life of that mosquito. If it goes out to feed again, it can spread the virus.”

According to the Public Health Agency (PHA) of Canada, there are 74 species of mosquito in Canada, but only 10 can carry the West Nile Virus. Of those 10, the Culex family of mosquito is the most likely carrier.

PHA information online stated that less than 1% of mosquitoes in any given area are infected by West Nile.

According to Public Health Ontario, there were no reports of West Nile virus in Ontario as of July 6.

Meanwhile, the heavy rain over the past month has made much of Chatham-Kent an excellent breeding ground for the little bloodsuckers. Standing water and damp ground make for large swarms of mosquitoes.

To help reduce the number of mosquitoes in your neighbourhood, Hatten suggested people regularly empty standing water from items around their yards.

“Turn over empty pots and empty birdbaths once a week,” Hatten said.