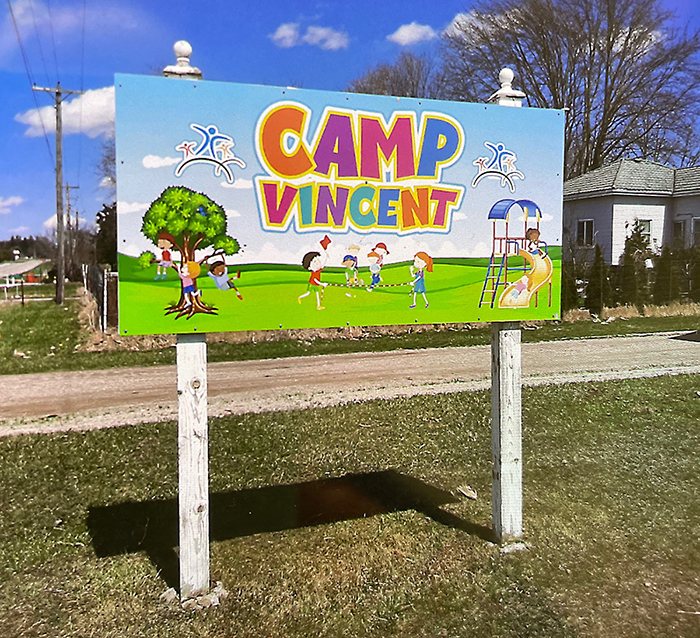 Despite thousands of dollars in donations and hundreds of hours of sweat equity, Bothwell’s St. Vincent de Paul children’s camp won’t be operating this season.

COVID-19, inflation and a lack of available staff are behind the unexpected closure, said Connie Badour, president of the Kent Deanery of the Society of St. Vincent de Paul.

The combination created a perfect storm.

“I’m truly shocked,” Badour told The Chatham Voice. “This isn’t something we expected as we had high hopes for re-opening and having a successful season.”

Founded 51 years ago in 1971, the sleepover camp experience at St. Vincent de Paul was a summer rite-of-passage for scores of youngsters across Southwestern Ontario.

This year marks the third season the camp has been closed to guests. Besides the obvious hit from the pandemic, Camp Vincent has also been plagued by vandalism in recent times.

Plus, many of the buildings needed essential upgrades to bring them up to code.

But organizers rallied and dozens of volunteers stepped forward. Badour said the work was completed with many donated hours, many from former campers interested in making the facility operational.

Not only did the 69-acre site offer youngsters a wide array of activities and learning experiences, the camp provided local teens and young adults with job opportunities.

On June 4, Badour said the camp held an open house to showcase the camp’s many upgrades aimed at generating interest from parents, young campers and prospective employees.

Only 35 showed up, she added, noting organizers were expecting at least 100.

Finding counsellors and staff was extremely difficult, Bradour added, even though organizers advertised extensively on social media and in local papers.

“We just didn’t get the people,” she explained.

Also, to blame, said Badour is runaway inflation as many parents don’t have the discretionary money to fund a week’s stay at Camp Vincent — even though some sponsorships are available.

“Even though we have subsidies, it’s still quite a bit for a family,” Badour noted. The skyrocketing prices of gas, food and housing don’t leave any extra dollars for camp or some.

“Costs are rising for everyone and costs at the camp are rising as well,” Badour said, adding materials for upgrades, food, labour and upkeep have risen exponentially.

“Economics shut us down,” she added. “And COVID shut us down – both literally and figuratively.”

Badour said there was a further complication as the St. Vincent de Paul Camp had received some grant funding and that had to be returned.

Going forward, Badour isn’t sure what the future holds, but selling the camp hasn’t been part of the discussion.

“We’re not talking about selling at this point but it’s not looking promising,” Badour said. “But we can’t keep asking for donations and help for a camp that’s not running.”

Over at Camp Kenesserie in East Kent, things are holding steady.

Executive director Dan Richards said the camp is expecting a full slate of summer camps and an adequate staff of 25.

Everything is covered off, except for lifeguards, Richards said, adding that’s an across-the-board shortage.

Richards said the only other hiccup happened two weeks ago when the camp had to close because staff members had COVID-19.