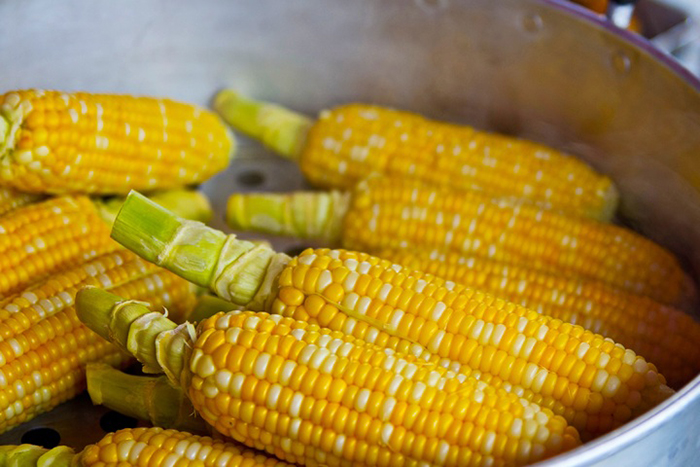 That’s right, corn. And it’s planted on a portion of the former Navistar site.

The planting of about 1.5 acres of corn by the owners of the property – Don Tetrault, Rob Myers and Mike Vagi – is symbolic and humorous, and it is telling.

It says the 80-acre property is not one massive brownfield.

What it is, however, is one heck of a gravel pit. The new owners have had the land for 13 months and have employed people from the start to break up the acres and acres of concrete that once served as the foundation for the massive Navistar plant and its various outbuildings. Heck, they’ve discovered concrete foundations as far as 10 feet below ground.

So, yes, the clean up is taking time. It’s also taking some serious heavy equipment, as the owners have purchased machinery normally only seen in mines or quarries to move large quantities of materials.

That being said, there is already one building up and ready for occupancy on the Richmond Street site, and the pieces for another are on hand. Building the second structure will likely begin this month.

Both buildings are in excess of 60,000 square feet. But they only take up a small portion of the acreage.

One has to tour the property to get a true understanding of the massive scale of what is transpiring there. The piles of concrete awaiting crushing; more converted to gravel, and still more waiting to be broken up.

In the meantime, soil and gravel that tests have indicated is contaminated sits off in a much smaller pile waiting to be hauled to the landfill.

Remediating that site and breaking up the concrete are massive undertakings. It appears the ownership group has made huge progress on all fronts, and municipal officials are quite happy as well.

They have had inquiries, and now the province has that property on its economic development radar. It will be interesting to see how things develop in the near future.

Everyone will benefit from that land being repurposed.