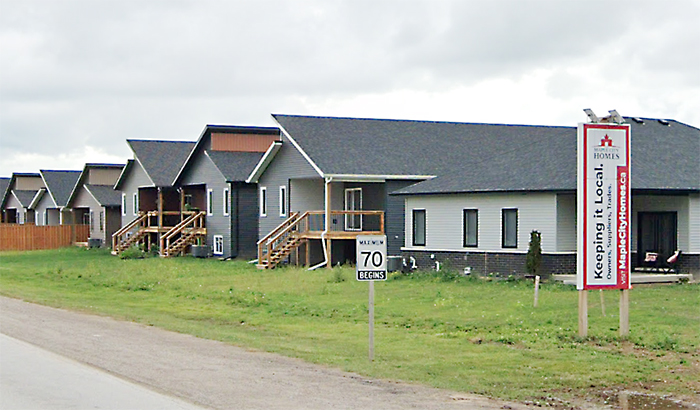 In a highly unusual move, a Chatham home-building company is freezing its prices on new builds for 2022 and rebating 14 customers more than $1.1 million.

Chatham-Kent’s record-setting white-hot real estate market – like the rest of Ontario – is prohibiting new buyers from getting into the market due to skyrocketing prices.

The folks at Maple City Homes decided to take action.

“Someone had to step up and say enough is enough,” Nelson said. “We decided to do it.

“We know we can make more profit but we don’t think it’s right,” he said. “This is what’s right for the housing sector.”

“We didn’t feel that was a fair price point,” Nelson said.

The price of an average build at Maple City Homes is $599,000 and will remain so for the rest of the year.

The lower price allows more people to get into the market, Nelson said, while allowing Maple City to expand.

“We can build three times as many at that price,” he added.

Nelson said the price freeze and reduction comes even though construction costs have doubled in the last three years.

Noting that MCH understands the social problems that stem from being unable to afford a home,

the company is proud to donate a portion of the sale of every house to various local charities through Because We Care Chatham-Kent. The hospital’s new Withdrawal Management Centre was the latest to benefit, receiving $157,000 in funding.

Nelson said he hopes the price freeze and reduction idea will catch on.

“We hope to see this concept spread through other communities – it’s the right thing to do,” he added.

According to Nelson, MCH-constructed houses are the most energy efficient homes in Ontario, based on monitoring by A&J Energy Consultants.

MCH has 47 local companies helping build their homes, which contributes to the region’s economic engine, providing a significant number of good paying jobs in the trades.

“It is very good for our community and will allow new buyers to get into the market,” Canniff explained.

“The ceiling is being capped, which is great,” he said, noting it will help keep Chatham-Kent housing in the “affordable range.”

Canniff said many people have been asking when runaway real estate prices were going to cool, and the move by MCH is part of the solution.

“I’ve got to hand it to them for stepping up and doing something,” Canniff added. “Chatham-Kent is growing and this will help more people be able to move to Chatham-Kent.”

In the first four months of 2022, the average price of home in Chatham-Kent was $505,000, according to statistics from the Chatham-Kent Association of Realtors.

Since its inception, Maple City Homes has built more than 300 homes locally. It has another 150 planned for 2023. In 2024 it will add over 300 units, as it will begin building condominiums as well as detached dwellings.

Nelson and his wife Kim, both of Family Lending, as well as Gilles Michaud, Darryl Clarke and Trevor Mailloux, own MCH.