Home sales remained on fire in Chatham-Kent in December, and the president of the local realtors’ association said she doesn’t see things slowing down any time soon.

Amber Pinsonneault, president of the Chatham-Kent Association of Realtors (CKAR) and broker of record at Royal LePage Peifer Realty, said the demand is far outstripping the supply of homes still.

“It’s just the way real estate’s been going for the last year and a half,” she said of the brisk sales and rising prices. “I think I stopped being surprised half a year ago. Everyone should be too. The general public is expecting things to go backwards, but it will never go back to where it was.”

In December, 133 units changed hands through CKAR reps. That’s up nearly 58 per cent from December of 2020 and set a new sales record for the final month of the calendar year.

Pinsonneault said the pace of sales is driven by outside investment, adding the vast majority of that is being done by people moving here, and not people speculating on property values.

“We have so many people relocating here. The demand is so much higher,” she said. “It won’t balance itself out until we see a change there.”

But, with more and more people becoming aware of the still-attractive property prices here, combined with the great quality of life, outsiders will continue to seek out Chatham-Kent as their next place to live.

“People can work from home now too. That changes things. Purchasing a home and being able to work from home is the new reality for a lot of us,” she said, making C-K more enticing to people living in the expensive GTA who have the capability to work from anywhere.

In amongst the movers are the speculators. Pinsonneault said they are few and far between.

“You do have people purchasing here and not living here,” she said. “I think that number is greater in the public’s eye than what we are seeing. A lot of people are actually relocating here to retire or work.”

She said the low number of speculators means there is no so-called real estate bubble here. Such bubbles can burst when interest rates rise or the economy turns south.

Strong interest in home buying makes it a seller’s dream, but a buyer’s nightmare. Pinsonneault said bidding wars are a regular part of the local home-buying landscape.

Meanwhile, inventory continues to rebound, as a greater number of homes are coming on the market, but the hot sales activity is depleting those levels.

“Even though the number of newly listed properties was above average for this time of year, it was still not enough to keep pace with the unrelenting demand we have been experiencing,” Pinsonneault said. “Consequently, overall inventory has dropped to the lowest level on record.”

The dollar value of all home sales in December 2021 was $58 million, almost double the same month in 2020. This was also a new record for the month of December.

Pinsonneault said interest rates are creeping higher, which is one way to slow down the housing market. She thinks buyers are largely prepared for that, especially given the uncertainty of the pandemic on the economy. 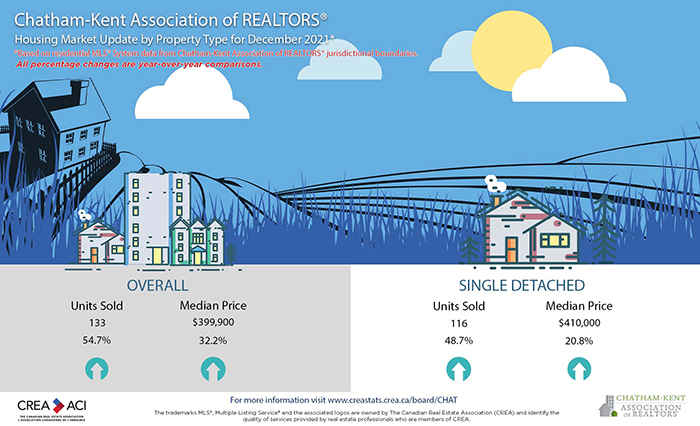