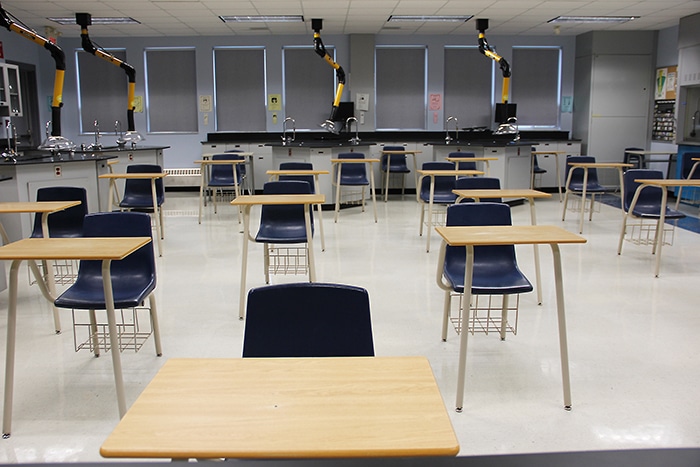 Parent Kelly Smith (not her real name) is uneasy about sending her teenager back to school.

“Concerned” is how the Chatham-Kent resident described how she feels about youngsters returning to the classroom, given the ongoing surge of the COVID-19 variant.

Sharing lunch spaces with unvaccinated students and a change in testing are major issues Smith is worried about.
“Our kids have more protection against the virus in a restaurant,” Smith said, adding that at least with vaccine passports you know who is, and who is not, immunized.

The Voice has agreed to conceal Smith’s identity using a pseudonym, as she didn’t want any repercussions arising against her child or her family.

She wishes the province and schools would have been more forthcoming with reopening details.

“More information would have been helpful,” Smith noted. “There are many unanswered questions,” she said. “It’s not that hard.

“I think waiting a couple more weeks would have helped the situation.”

Her family is fully vaccinated and boosted and takes every precaution, but Smith remains worried someone in her family will contract the virus and pass it on to aging grandparents and relatives.

Although local schools plan on handing out rapid antigen tests to the symptomatic, Smith said that doesn’t begin to address the spread of the virus.

The Ford government reopened schools for in-person learning Monday, despite the record number of coronavirus cases.

However, CK Public Health and area education directors are assuring parents it’s safe for children to go back to class.

A more rigorous screening tool, three-ply masks for all students, N95 masks for teachers, better ventilation including the addition of more HEPA filters, and rapid tests for teachers and students who become symptomatic at school are some of the enhancements to school safety.

In a media press conference Jan. 13, LKDSB education director John Howitt said because of omicron’s transmissibility, officials had to begin to address the virus in a different way.

Howitt said he feels reassured after working with provincial and municipal health leaders on the reopening, calling the change in strategy a “new paradigm.”

However, he said the extra two weeks of being closed has allowed more time for teachers and students to get vaccinated or boosted.

School boards will not be reporting school absences until they hit the 30-per-cent mark.

Colby said the virus is “sneaky,” and changing like a “chameleon,” but he stressed it is better for children to be in the classroom as there is a “mental, social and intellectual cost in keeping students out of school.”

A short-term online teaching option is being offered to parents on a temporary basis for parents who are not sure. For more details, parents are asked to contact the school boards.