So much so, heavy equipment has been used over the weekend and into the week to clear two large globs of floating rubble that included a mix of trees, driftwood, vegetation, and even a large yellow duck floatie, plus a pontoon boat and a personal watercraft.

Falkner, who is in charge of bridges, said the company continues to monitor the situation, clearing debris as it comes downriver. He said it’s not yet known how the flooding will affect the timeline of the $14-million rebuild of the Third Street Bridge.

“The water will have to go down before we can assess the damage,” Falkner said, as the forms for concrete are made of wood.

However, he said the municipality hopes to have at least two lanes of traffic open by year-end.

The target for completing the bridge is spring 2022.

The Fifth Street Bridge also saw an accumulation of debris. It closed overnight Sunday and Monday to allow municipal public works to remove the blockage.

On Sept. 22, Chatham-Kent received 60 mm. of rain, but the amount increased as you headed upstream.

Wintermute said there was a big stretch through London and another pocket that received upwards of 100 mm of rain.

Flooding wasn’t as bad as predicted, he said, adding the high water was expected to peak in Chatham Sunday night or early Monday morning.

The authority did not utilize the 6th Street Dam in Chatham, Wintermute said.

He said the timing of the flood is unusual.

“Our experience is that we don’t normally have summer floods,” he said. 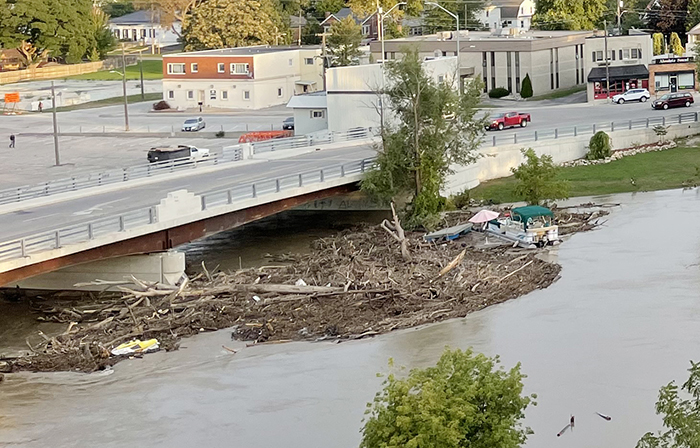