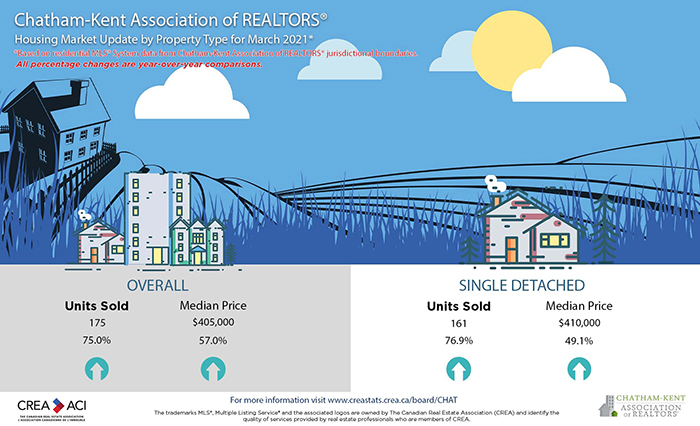 Home sales in Chatham-Kent set yet another record recently, as 175 units changed hands in March.

“March was another record-breaking month for our association,” said Laura Tourangeau, president of the Chatham-Kent Association of Realtors (CKAR), in a media release.

Tourangeau said the number of sales in March wasn’t the only record achieved.

“Resale home sales set both a new March and a new all-time monthly record this past month,” she said.

Inventory, which has been all but depleted in recent months, saw some relief as well, as more homes came onto the market.

“We also saw an uptick in the number of resale properties newly listed in March, which helped to shore up inventory. An early spring coupled with a depleted overall inventory continues to put upward pressure on prices,” Tourangeau said.

In terms of actual dollars spent on homes in C-K in March, CKAR figures show $73.4 million doled out in March of this year, up 173.4 per cent from the same month a year ago. This was a new record for the month of March and was also the largest dollar value of homes sold for any month in history.

Still, with 83 homes listed on the market at the end of March, that’s the lowest number of homes for sale in the third month of the year for more than three decades.