Shining a light on Dresden

Nov 25 • Feature Story, Life • No Comments on Shining a light on Dresden 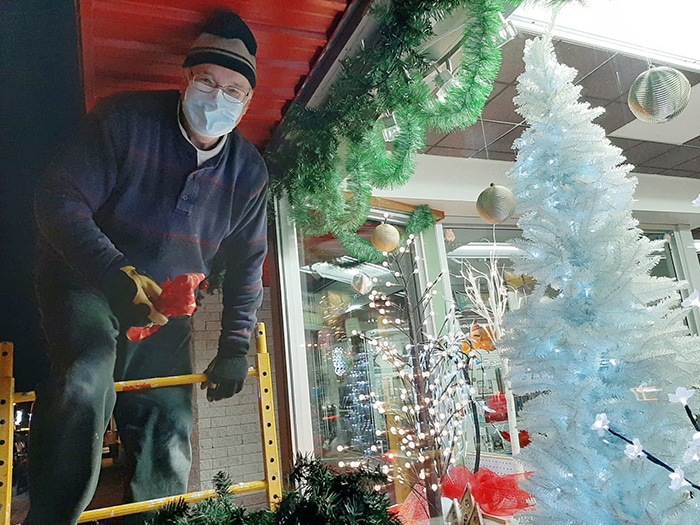 The May 16th Miracle has rippling effects. Not only did it inspire The Gift (see page 1) but it also inspired one community in Chatham-Kent to shine some light on businesses during the pandemic.

Dresden lawyer Stuart Kiar was inspired after the May 16th Miracle and gathered the same volunteers to launch Dresden Shines.

“And the day after I was thinking about all the good work being done and what can we do to sort of keep everybody involved,” he said.

The initiative is a collaboration between multiple community groups and sponsors to decorate mainly businesses and also homes with Christmas lights.

Normally Dresden hosts the Christmas Night Market, an event where a section of the downtown is shut to car traffic, and residents have a chance to browse local vendors for their holiday shopping.

“The purpose is to lift community spirit and also to fill that (the market’s) void because it’s been such a big part of the community every year,” Kiar said

He is also hoping the downtown Christmas beautification will attract nearby residents to visit Dresden and support local shopping. The market would normally attract 10,000 individuals to the community of approximately 2,500 people.

Shops will remain open until 8 p.m. every Thursday.

Kiar and his co-organizers are also encouraging Dresden residents to decorate their homes with a community “cup” to be given out a prize as a fun incentive to motivate neighbourhoods to work together.

An Illumination Tour will be safely given to visitors in the form of a drive through event.

More events will be released on the Dresden Shines Facebook page in the coming days.

“When we work together Dresden Shines,” Kiar said.

The long-time Dresden lawyer has been busy assisting with various projects in his adopted hometown since moving here in 1996. His work is what led him to receive the Wallaceburg and District Chamber of Commerce Business Improvement Association award for Dresden this year.

Kiar says he doesn’t do it for the accolades.

“I just think it’s what you need to do,” Kiar explains of his volunteer service. “It’s good, it’s a good place to live. In a way, it’s become my hobby.”

The 2020 award from the Chamber marks the second time Kiar has been honoured.