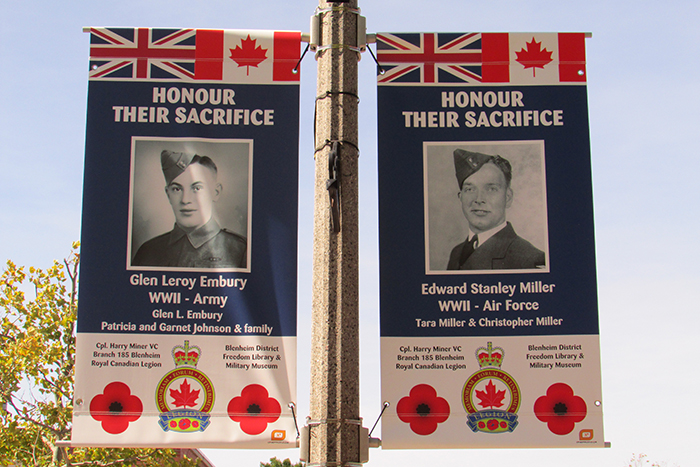 The Royal Canadian Legion, for some non-members, might only be thought about during the weeks leading up to Remembrance Day.

They are probably best known for organizing parades at the cenotaph and the annual Poppy Fund, which provides financial assistance and support to veterans. But as time and veterans of the world wars pass, Legions across the country are slowly dwindling in numbers.

“It’s a known fact that membership is going down. It is. Especially during (COVID-19) the smaller ones are going to struggle. The one in Rodney just closed down again,” said Brian McCabe, past president of Branch 113, Dresden.

“It’s hard to interest young people because their dads weren’t in the war like ours were. Maybe their grandfathers were but they’re two generations removed from that. It’s a tough sell.”

McCabe is hoping people will remember all the other value Legions bring to their communities, especially in Chatham-Kent, which is credited for starting the first ever Legion Week.

In 1953, a group of comrades from Chatham-Kent, specifically Chatham and Blenheim, got together to brainstorm ways in which they could gather more members and spread the word about what they did.

Dresden’s Branch then stepped in to host an open house and that soon became known as the first Legion Week.

In 1975, District A Legions followed suit, and five years later it was held across the province in the third week of September. It commences on the Sunday with a parade called the Drum Head to mark the occasion, followed by open houses, trivia nights or dinners, and ends on the Saturday.

“If a branch, for valid reasons, feels it cannot hold a week of activities, or at least an “open house” for one day, they should ensure that the community is aware of what the Legion has done, is doing and will do,” reads Legion guidelines.

COVID-19 has certainly given Legions a valid reason not to host events in 2020, and because of that Chatham-Kent only got a formal flag raising at the Civic Centre this past Friday. But that won’t stop McCabe from spreading the word of what his branch does.

McCabe joined the Legion in 1968 after his father, who joined the navy, suffered a stroke and needed to be accompanied to meetings. He has been a participating member ever since, and sat on the board for 25 years.

“We’re finding now that a small number of people (10 executives) are doing the organizing, the work, parties, dinners or whatever. We’re getting burned out,” he said,

In the hay day, Dresden’s branch saw more than 200 members; now there are 150, which is “pretty good” compared to other legions, according to McCabe. Membership is only $50 and anyone can join.

“It’s become more of a business now than a club.”

But McCabe said it is still worth the $50.

“It’s a community. A lot of our money goes into the community like Rotary or Goodfellows.”

Every year, the Legion hosts a free fishing derby, lunch and bait included, for kids to have some fun. Just McCabe’s branch sees 80-100 children at the event. Fridays are Lite Bite nights where executives take turns to cook food and offer the community the opportunity to share a meal and drink for a small fee.

“We had to stop in March but that was going really well. We’ve been doing that a couple of years and the money goes in the general fund.”

Chatham-Kent’s young athletes also have the Legion to thank for sponsoring their minor hockey teams. During the Christmas season, Dresden’s Legion supplies 75 to 90 turkey baskets to families in need, no questions asked.

“It’s amazing the donations that come in from businesses and individuals for that cause. When you call people, they’ll come. We’ve got a good list of volunteers but they don’t want to take that extra step and come to monthly meetings. But I must say our community is great, when you call people they will help.”

McCabe hopes Chatham’s youth will take up the mantle but he said the key to that happening is remembering.