The sons are brewing, for multiple causes.

Sons of Kent Brewing Co. in Chatham recently completed its second batch of Fingask ’45, with proceeds slated to go to the pipe band of the Branch 642 Royal Canadian Legion as well as the Veterans’ Poppy Fund.

Their first batch, which came out earlier this year, was originally earmarked to help send the band to Europe in May, specifically to Vimy Ridge to commemorate the 75th anniversary of the end of the Second World War, but COVID-19 delayed that trip.

Pipe band member Brent Flaglor said they aren’t sure when the trip will now take place.

“The plan was to go back this coming spring. I can’t see that happening. They’re hoping maybe 2022. Nobody really knows,” he said.

Instead, funds raised from the first batch went to the pipe band, as well as Outreach for Hunger.

Doug Hunter, one of the four founders of Sons of Kent, said after the trip to Vimy was side tracked, pipe band members suggested some of the money go elsewhere.

“It was their idea to donate part of the proceeds to Outreach for Hunger,” he said.

Outreach for Hunger’s Brenda LeClair said the support is appreciated.

“This is great for us, especially at this time of year. As we’re getting into the colder weather, and the heat comes on, people are going to be coming to our door more and more often,” she said. “We’d like to make sure we can keep up with that demand. Donations like this are what puts food on the table for families in Chatham-Kent.”

Fingask ’45 is named after the tartan of the pipe band.

Hunter said the brewery is committed to supporting groups in the community.

Tom Elliott, another member of the pipe band, said the support is appreciated.

“All our funding to buy our kilts and our tunics, all the parades that happen, that’s to raise money for our kit. That’s not happening,” he said, referring to COVID leading to the cancellation of so many outdoor events. “Any money we would have made this year is done. This is a huge help to the band this year.”

Flaglor said interest in the red ale is widespread.

“My phone’s been going non-stop. All my friends are big supporters of Sons of Kent. Anything they bring out, it seems to go right back into the community and spark everything all over again,” he said. 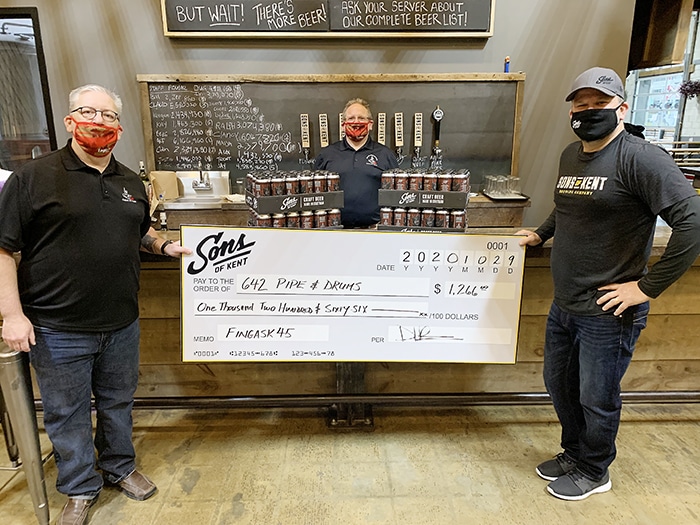