How do you define a miracle? In Chatham-Kent, the definition is 678,200 pounds of food, collected in one day.

That’s how much food organizers say was collected across the municipality for the May 16 Miracle.

Put together in just three weeks, the Miracle message was a request for the residents of C-K to place at least one non-perishable food item on their front porches on May 16 for collection.

An army of volunteers collected those donations and dropped them off for sorting and eventual distribution within to food banks across Chatham-Kent.

The collection took a matter of hours; the sorting took days.

READ MORE: May 16 Miracle tally still a work in progress

Lally looks back on May 16 with pride.

“The whole day was awesome. The coolest part was when the trucks started pulling in and lining up, they were full of food,” he said of his experience in Tilbury that day. “Even the amount of food that was just piled up from a small portion of trucks that had unloaded already was amazing. It was an overwhelming feeling.”

For Robichaud, her fondest memory was of the overall can-do attitude. She said after their forklift got stuck on the morning of the event at the warehouse they had initially planned on using to collect food, she reached out to her TekSavvy bosses and received permission to shift to another, larger, warehouse.

It turns out it was a fortuitous move.

“The little warehouse we originally had wouldn’t have housed all the food. We had a spot to bring in all the massive amounts of food that kept coming in,” she said.

Huggins recalled all the happy faces he saw while driving around Blenheim that day.

Three three agreed being involved in the Miracle has been an emotional experience. Lally said if he spoke about the support from his Lally auto team too much, he’d tear up.

Robichaud said she has shed tears of joy pretty much daily since May 16.

“My soul is happy. I’ve cried a ton. It’s a wonderful thing,” she said.

Huggins said the effort during and after May 16 reaffirms his love of this municipality.

“Chatham-Kent is probably one of the most amazing places on the planet to live,” he said adding more than 5,000 volunteers helped organize, execute and sort out all the food raised, before, during and after May 16. 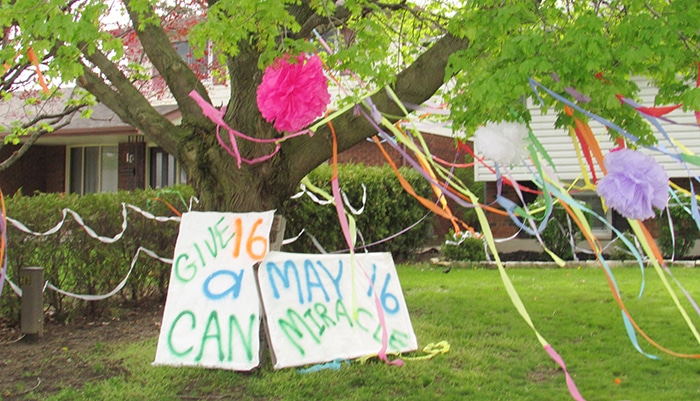