Stolen, and some recovered

Yesterday morning, police received information that a stolen vehicle was parked in a lot on Tweedsmuir Avenue West.

Officers attended the area and located a stolen 2018 grey Mercedes from LaSalle.

The vehicle was towed and the owner was notified.

The truck was last seen bearing Ontario license plates AP70785 and had a white Philadelphia Flyers decal in the rear window.

Yesterday afternoon, an officer on general patrol observed a man driving the stolen truck in the area of Grand Avenue and Elizabeth Street.

The officer initiated a traffic stop, however, the man failed to stop and continued at a high rate of speed down Selkirk Street, police say.

The pursuit was terminated for public safety reasons as the man was driving erratically.

In the area of Selkirk Street and Hillyard Street, the man pulled up on the front lawn of a residence and fled on foot.

The man was taken into custody following a short foot chase.

A 34-year-old man of no fixed address has been charged with:

– Being in possession of property obtained by a crime over $5,000;

– Dangerous operation of a motor vehicle;

– Failing to comply with his release conditions x3;

– Being in possession of a weapon contrary to a Prohibition Order x3; and

– Possession for the purposes of trafficking x2

Someone entered a garage on Eastlawn Road in Chatham yesterday and stole a navy blue 1985 Pontiac Firebird.

Yesterday afternoon, the vehicle was recovered by police in Windsor. 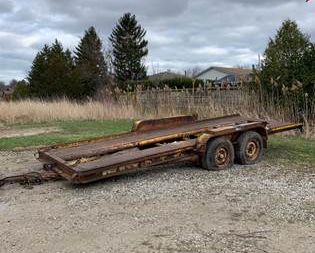 As previously released this month, unknown suspect(s) stole a black 18-foot tandem-axle trailer from a business on Cathcart Street in Blenheim. The trailer was last seen with Ontario license plate Y17661.

In doing so, the suspect(s) left behind the trailer in the accompanying photograph. Police are trying to return this trailer to its rightful owner.

Through investigation, police learned that the driver of an ATV lost control of his vehicle and hit a pole. Minor injuries were reported.

A 16-year-old teen was charged with driving with no license.

Last night, police responded to the report of a suspicious person around a retirement home in Chatham. Officers located the man who was in possession of a knife, contrary to his Probation Order.

As officers approached the man, he walked away and directly into traffic on Grand Avenue. As the man was placed under arrest, police say he become combative in an attempt to resist arrest. The man was taken into custody and transported to police headquarters.

Jacob Smith, 25, of no fixed address is charged with failing to comply with his Probation Order and resist arrest. He was released pending a future court date of July 29, 2020.