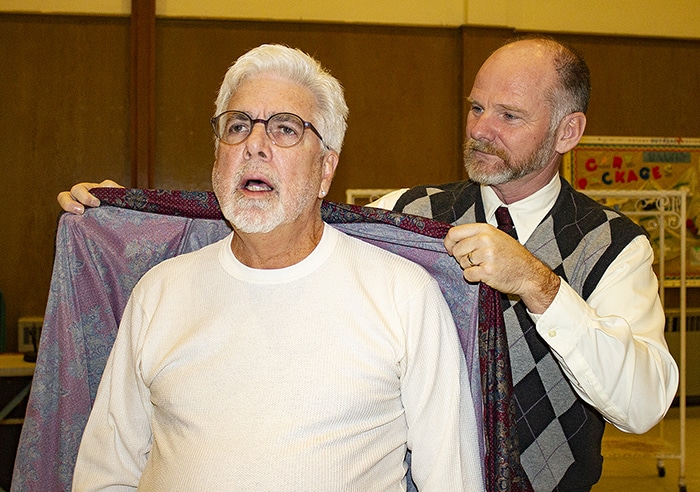 Dan White, left, and Dan O’Hagan rehearse a scene for Theatre Kent’s production of The Dresser, which runs at the Kiwanis Theatre Feb. 6 to 8.

Theatre Kent will be taking audiences on a trip to the past with their production of The Dresser, Feb. 6 to 8 at the Kiwanis Theatre, beginning at 7:30 p.m.

As the Second World War raged, the British government decided on a unique propaganda effort. Theatres large and small were encouraged to remain open, even as the air raid sirens sounded, and professional Shakespearean theatrical companies were sent across England to remind residents they were not only in a battle for survival, but in a battle to preserve the nation’s cultural heritage as well.

Ronald Harwood’s play tells the story of an aging actor’s personal assistant and his extreme efforts to ensure that the show – and the actor – will go on.

The play was first performed in Manchester in 1980, before moving to London’s West End, where actor Tom Courtenay received a Tony award for best actor as the dresser, Norman. Three years later, it was made into a film starring Albert Finney and Courtenay, who reprised his role.
In this production, actor Dan White is taking on the lead role of Norman, who has been with the company for 16 years, taking care of Sir’s every need and ensuring that Norman’s own safe world of the theatre remains intact.
Director Karen Robinet said The Dresser is an actor’s play, and the talented ensemble bringing the show to life at the Kiwanis Theatre are from across Chatham-Kent and beyond.

Former Theatre Kent member Dan O’Hagan is taking on the role of Sir, the aging star and producer of this particular Shakespearean company. O’Hagan is driving in from St. Thomas to play Sir, which he called the “role of a lifetime.”
Robinet said the roles of Norman and Sir are particularly demanding, but added both White and O’Hagan are more than up to the task of breathing life into the characters.

In addition to the two leads, newcomer Deb FitzGerald is appearing as Her Ladyship, Sir’s life partner, while Dawn Boudreau is playing Madge, the company’s stage manager.
The production is Theatre Kent’s entry into the Western Ontario Drama League Festival, and will be publicly adjudicated following the Friday night performance by Mark Mooney.

The poignant drama offers audiences an opportunity to peek behind the curtains of wartime British theatre, and also provides some humour along the way.
Tickets for the show are available through the Capitol Theatre box office, online at www.cktickets.com or by calling 519-354-8338. They will also be available at the Kiwanis Theatre, with the box office opening at 7 p.m.